The HTC Shift has been the most anticipated device since the iPhone in most mobile circles, but it has also seen its pre-release shine diminished by a number of different factors, one of which is low screen resolution of 800×480. Steve “Chippy” Paine captured some pics and video of the device at the recent British launch of the device, and is telling us that the 1024×600 resolution (I’m guessing some form of pixel doubling) is better than he originally thought it would be. 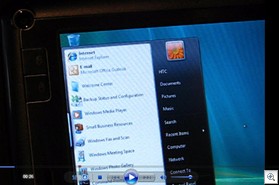