The iPad 12 Months In and Still Going: When Technology Gets Out of the Way, Everything Becomes More Delightful 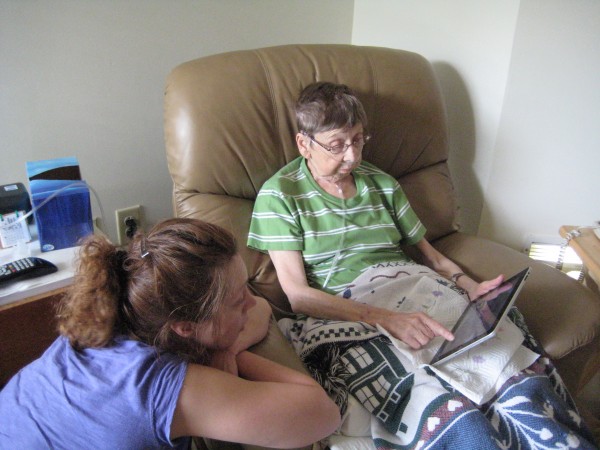 One year ago I got my first iPad on April 3, just like a bunch of other folks. it was a crazy and scary weekend. My mother was terminally ill and she experienced an incident leading us to think she might die that weekend. I was all prepared to do a video review of the iPad that morning after it arrived, but those plans quickly got put aside. As my mother recovered from that incident and her journey continued until she passed on September 30, the iPad that arrived that April Saturday became my constant companion on my journeys back and forth to spend time with her.

My Mom hated computers. Actually that’s not strong enough. She despised them. I had talked her into a desktop computer several years back but she barely touched it after I bought it for her. It sat in her TV room for the niece and nephew to use when they visited, and for me to do updates on when I visited. We’d send her pictures and links to articles about the theatre and our life via email then call and ask her if she’d seen them. She’d say no because she hated dealing with “that damned computer.”

But during her days in the nursing home she couldn’t wait to see what pictures I’d bring in on the iPad, or read articles I’d collected for her. She’d sit in her chair and flip through the pictures and articles and when other visitors or the nursing home staff would come in she’d make them sit and show them as well.

I would often kid her about the fact that she was doing all of this on a computer and that she hated computers. She’s respond by saying she still hated computers but the iPad wasn’t a computer, it was just a way to look at stuff. I’ve often said Steve Jobs should have sent my Mom an iPad because she had nailed what he was trying to accomplish.

As the iPad just celebrated its one year birthday yesterday I think about those experiences with my Mom quite a bit. Watching the latest iPad ad that Apple has just launched, I have to say that while the ad copy may sound cheesy, the line “when technology gets out of the way, everything becomes more delightful” does indeed resonate strongly with me. The technology certainly got out of the way in terms of my Mom’s delight in looking at those pictures. And those moments were a delight that I treasure always.

That line of copy resonates for me in other ways too. When I first picked up a Toshiba 3505 Tablet PC it was a magical experience. My wife just about kicked me out of the house because I couldn’t stop playing with the damn thing. I picked up a lot of Tablet PCs after that first one and each one served me well and built on that magic of being able to take notes while on the roam in rehearsal or at meetings. I can’t say that my first moments with the iPad had that same sort of magic due to the circumstances of that weekend and my mother’s health. But I can say that after I began integrating the iPad into my work and play I enjoyed the changes that it brought to my everyday chores and relaxation moments in much the same, if not more ways than that original Tablet PC did.

I know that many will call me a fan boy, or a sucker, or worse for appearing to buy into the Apple machine’s hype. I’ve been called worse for lesser reasons. But as far as I’m concerned after living with an iPad for a year (actually two now that I own the iPad 2 as well) it is safe to say that I do buy into that one line of ad copy pretty strongly. What attracted me to that original (and later) Tablet PCs was the enjoyment of using the form factor. I’m attracted to the iPad in the same way. Call it enjoyment or call it “more delightful” or call it what you will. If you relish the opportunity to do a task because of the joy of using the tools at your disposal to do that task, then as far as I’m concerned you’ve hit the mark. And, when the technology can indeed come close to getting out of the way, you’ve not only hit the mark, you’ve hit it hard enough to make a lasting impression.

And the GBM Mega iPad 2 Review