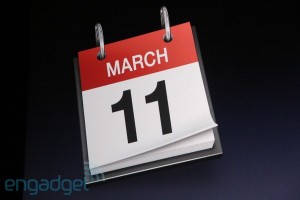 So the iPad 2 debuted today and it has a killer feature. It’s not the A5 dual-core CPU or the even thinner and lighter body. Rather it’s something far simpler yet out-of-reach for its would-be competitors: availability.

Will it reach us in weeks or months? No, the iPad 2 will be out next week, March 11th. That’s U.S. Other countries will follow on March 25th and everyone else shortly thereafter. Exact dates for everyone will no doubt depend on whether we gobble up your supply (sorry in advance), but basically, Apple announced the iPad 2 in March and it will be available in March.

Really simple. Nothing to do with the hardware or software or anything technical. Just announce a product and release it, and yet, no one else seems to understand that talking up your tablet ad naseum is pretty pointless if you don’t have any to sell. Your tablet could rock 16GB of memory, 1TB of storage, and a quad-core processor, but it still needs to get into people’s hands. Building hype is useless if you don’t capitalize on it while you have it. Apple understands that, and that’s the true killer feature of the iPad 2 (the other features look okay too).