Apple’s Your Verse campaign is all about how individuals use the iPad to create. I’m sure you’ve seen the commercial that features individuals in a variety of fields from storm chasing to sports to engineering to the arts. The commercial features a voice over by Robin Williams lifted from the film Dead Poets Society begging the question, “What will your verse be?”

Apple has been highlighting further some of the stories behind the powerful images featured in the commercial and this month it focuses on Bollywood choreographer Feroz Kahn and how he uses an iPad to create colorful and complex dances for film. 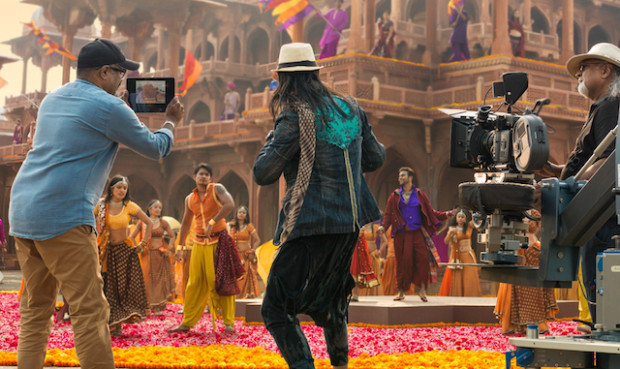 Those of us who work in the creative arts know that mobile devices and technology have been playing more of a leading role in how we do our work long before there were iPads. I don’t do film but do stage work. In rehearsal rooms, production meetings, and the theatre I’ve seen every generation of mobile tech play a role since mobile tech involved hooking up desktop towers under production tables. I’ve written quite a bit about how it has helped me and my colleagues over the years in everything from rehearsal note taking, staging, script prep and prop shopping.

Now with smaller, more mobile devices like Tablets the number of devices that take part in play production continue to increase and decrease at the same time. They increase because more creative workers are using iPads. They decrease because iPads (and yes, other Tablets) cut down on the number of devices an individual needs. In the last production I did, there were stage managers, designers, and technicians and one director using iPads to do the work that makes a play. When we are rehearsing light cues and a blackout is called for it is entertaining to watch how many folks reach for their iPads to turn them over or off quickly.

As a director I can recall lugging reams of research materials and script revisions into the rehearsal room along with renderings, sketches, draftings, and books full of images. Now all of that can be carried on an iPad.

So, it’s no surprise at all when this story about Feroz Kahn talks about replacing multiple gadgets with an iPad Air.