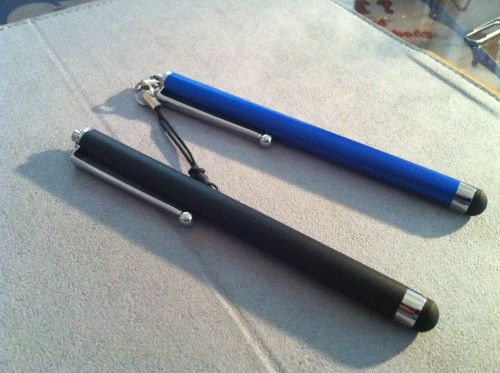 If you’ve been following along, you know I’ve been checking out a number of styli for use with the iPad. So have many others, including Hector Gomez. Recently I’d settled on the Box Wave stylus because of the rubber or silicon tip and how that makes laying down Digital Ink feel close to doing so on a Tablet PC with a Wacom digitizer. Hector recently pointed out the Targus iPad Stylus, which is available at Best Buy (listed as back ordered currently). I managed to find one on the shelf in a Best Buy store in Richmond this weekend and picked it up. The verdict?

Fundamentally, the Targus stylus presents the same feel as the Box Wave Stylus does. Your mileage my vary, but I see no fundamental difference between the two outside of the cosmetic design. In fact, I’d say it is the exact same with the exception of color choices and the little tether that comes with the Box Wave. Well, that’s not true. The Targus iPad Stylus can be had at Best Buy for $14.99. The Box Wave Stylus has been reduced in price from $24.95 to $20.95. So, if you don’t mind waiting until they are back in stock at Best Buy, you can save a few bucks.

In the picture, the Targus Stylus is black and the Box Wave is blue.

UPDATE: Check the comments to this post. GBM reader drnkusv reports that Griffin is also marketing this same stylus at $19.99. I guess someone is cranking them out and the usual roundup of companies that market these accessories are slapping their brand on them along with their own pricing. I’m guessing that if Apple ever got over its stance that a stylus is the spawn of Satan, and tried to sell one of these the price would be $39.99.