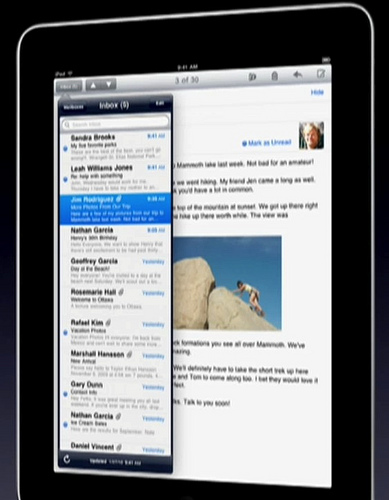 Software developer Fraser Speirs has taken a hard look at the user interface of the iPad through the photos of its unveiling and posted his thoughts and analysis in a 53-piece photo set on Flickr.

Being still photos, it doesn’t peel apart the motions and gestures as Gizmodo did in their video analysis, but it points out location of on-screen buttons, how entering formulas into Numbers works, and the many little touches that separate it from the smaller iPhone interface.

Primary focus is on the iWork apps (rubbing salt in a wound for me), and Speirs uses this gallery to dispute the argument that the iPad isn’t for content creation. Such arguments aren’t new to tablets. I’m sure we’ve all read at least one critic attack pen and touch for being inferior to the keyboard and mouse for content creation. My standard counter-argument still applies: not all content is typed and too many journalists can’t think of content in any other form.