The iPad2 Finally Makes It Into My Hands Interesting Issues Included 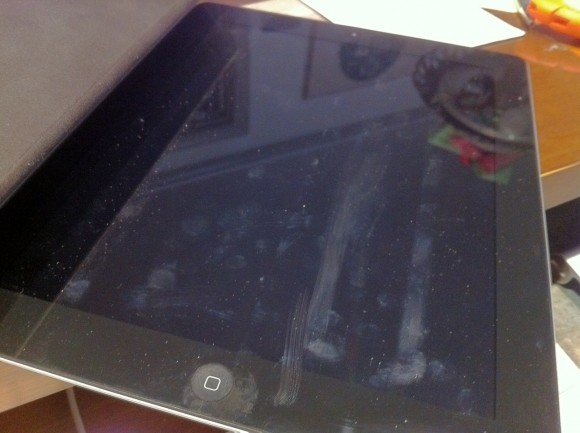 Of course the iPad2 would finally arrive on a day that I was in a tech rehearsal from 11am to 11pm. That seems to be how these things go in my life of late.

I was glad it finally arrived however, and I’m sure Apple is glad that they got some of the early orders (remember I actually ordered a few minutes before the official announced time of orders being accepted) before they roll out in 25 or so other countries today. I also understand that the ship time for new iPad2 orders has been reduced from 3 to 5 weeks a bit, so perhaps Apple is getting its supply chain in order.

We had a dinner break during the long day yesterday so I chose that time to do the first sync so that I could use the new iPad2 to take notes in the evening rehearsal. Everything synced over fine except my photos. I kept getting an error saying a file could not be found (intriguingly there is no error number on that message.) Not needing photos for rehearsal I moved on. Later, looking on line I found this solution that did solve the issue. It involves removing the iPod Photo Cache file and allowing it to rebuild. So now everything syncs over fine.

Remember I ordered an AT&T 3G model. I’m not planning on switching it on all the time but using it when I need it, assuming AT&T still allows that when the time comes. But intriguingly (at least to me) I noticed the 3G was switched on when the iPad booted and began syncing. As soon as the sync was over, I turned it off. I’m curious, since I never set up an account for that on AT&T if that is normal behavior? Have other 3G iPad or iPad2 owners seen that behavior?

Admittedly I was quite tired last night during and after rehearsal, so I didn’t notice until this morning that I had no system sounds on the iPad. Audio from songs or video played fine but clicks, beeps, and boops did not. A quick search on line yielded a fix for that issue. But boy, you sure wouldn’t know about that unless you were looking for it. If you’re having this problem go to General/Sounds and make sure that the “Change With Buttons” switch is in the On position. That will give you clicks, beeps, and boops. Maybe I’m dense, but that’s not intuitive in the least.

There’s no point in going over what the iPad2 has or hasn’t. There’s been excellent coverage of that here and elsewhere. One of the true tests of any new device for me is how quickly I can be up and running. Aside from the issues mentioned above (neither of which affected my work in rehearsal) I was up and running after the first sync. I did notice the improved speed and performance. I think, but will need to do some further testing, that Inking in Penultimate appears a bit smoother than on the original iPad (I took notes with that the night before). If that’s the case. I would attribute that to the improved processing power. I did appreciate the lighter weight while lugging the device around with a SmartCover. That said, I’m not too thrilled with the more angular beveled edge, as it makes hooking up a sync cable and hitting the hardware buttons more of an exercise than with the original iPad. Thinness comes at a price I guess.

Regarding that SmartCase, you’ll remember I gave Apple kudos for taking a cue from Macally for including a microfiber surface on the SmartCover that would essentially serve to wipe the screen clean when closed. It works that way on the Macally cases and works well. As far as the SmartCover is concerned, that’s total BS on Apple’s part. I take those kudos back. In early usage it does not work as advertised, and in fact leaves some pretty nasty streaks up and down the screen. Here’s hoping we’ll see smarter SmartCovers in the future from other manufacturers.

The iPad2 will be with me through rehearsals today and previews this weekend. I’ll be reporting on it as time goes along. At the moment, the issues above excepted, it is doing what I need it to do in a busy period for me and bottom line, that’s why I got the thing.