The iPhone 5S Will Look Like the iPhone 5 (Video)

The iPhone 5S release is approaching as parts, blueprints, screens and more leak out, all pointing to an iPhone 5S that looks like the iPhone 5.

This is not a major surprise as we expect the iPhone 6 will deliver a new look, and maybe a larger screen, while the iPhone 5S focuses on delivering smaller changes in the overall design and new software features as part of iOS 7.

While some feel Apple should skip right to the iPhone 6, bringing a completely new iPhone to the market to compete with the Samsung Galaxy S4 and the HTC One, the latest round of leaked parts and analyst commentary suggest iPhone 5S buyers shouldn’t expect sweeping changes when the iPhone 5S release arrives.

I the two-minute iPhone 5S video below we cover the alleged iPhone 5S parts, iPhone 5S display, iPhone 5S logic board and what we know about Apple’s typical iPhone product release cycle.

While competitors are ramping up screen sizes and introducing a new design every year, Apple is content to offer an iPhone design that lasts for two years. The iPhone 3G and iPhone 3GS shared a design, just like the iPhone 4 and iPhone 4S. We expect the iPhone 5 and the iPhone 5S will share the same design, something analysts and leaked components agree with.

It may disappoint some users who would love to see a brand new iPhone design this year, but the two-year iPhone strategy works in Apple’s favor. By keeping the iPhone design the same for tow years, and selling older models for two years, Apple expands the life of the iPhone to four years, opening up the possibility for more accessories for the phone. Compare iPhone 4 accessories to the Samsung Galaxy S2 and there is a stark difference.

This week FanaticFone leaked high-resolution images of what they claim is the iPhone 5S display including the digitizer and the LCD screen. This pairs up with the alleged iPhone 5S logic board spotted by Macotakara showing a small change in the overall size of the logic board. There are also a number of iPhone 5S parts leaks to Nowhereelese.fr and other publications showing small changes to the internal iPhone 5S design. 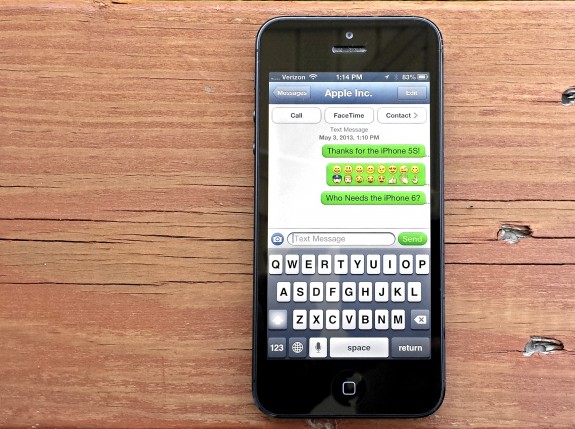 The iPhone 5S isn’t a problem for Apple. By offering a minor release every two years, consumers get more enjoyment from their purchases, even if it is partially psychological.

The iPhone 5S launch should take place in September, with a release soon after according to multiple sources. Apple typically launches the new iPhone within a few weeks of the launch event, and days after the new iOS release. The iPhone 6 is currently pegged for 2014 by several analysts.

iPhone 5S rumors point to a faster processor, a new camera sensor with a dual-LED flash and there is talk about a fingerprint reader built-in to the iPhone 5S home button or frame.