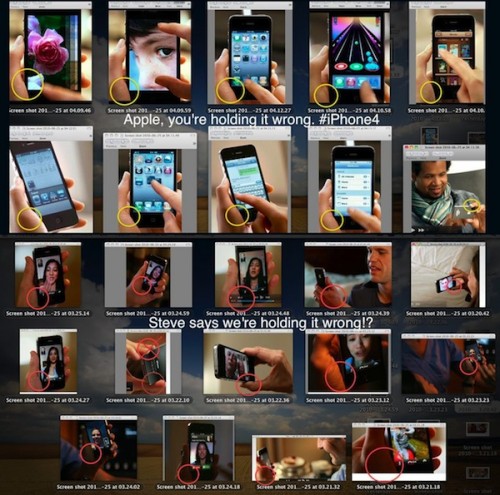 Call it the death grip, call it the Vulcan grip, call it what you want, but the amount of digital text flying through the Internet and yapped over the air waves on the new iPhone’s antenna issue is really amazing. There’s been all sorts of reporting on the issue from first person accounts to actual real science being laid out as to why this might be a real issues, and why it has always been an real issue with cellphones. Although curiously, we’ve never seen any real hoopla before this.

But after Apple issued its official response and then Steve Jobs responded to some emails telling us we’re holding the phone the wrong way I got to thinking. Engadget pretty much put a lie to the condescending “holding it the wrong way” approach with the series of pictures from the keynote and Apple ads (watch for those to change soon.) This is obviously a real issue that some (not necessarily all) are dealing with. The jury is still out on to the extent of the problem, but this is quickly headed to real PR issue, if not a real technology issue. Where I sit today, and this is of course my deduction and/or speculation, is that Apple got caught with its pants down on this one and is desperately trying to pull them back up quickly to cover its posterior. Here’s why.

The pictures Engadget lays out tell a pretty dramatic story. Given Apple’s attention to detail, I find it hard to imagine that they would treat this issue so cavalierly when it comes to advertising, if they knew they had a problem on (or in) their hands. By the same token, I don’t think they would have trumpeted this new antenna approach the way they did in the keynote, if they knew they had what appears to be such a serious problem. Given the visual evidence, Apple and Jobs’ “holding it the wrong way” response sounds desperate and childish in its defensiveness and threatens more rational statements about how signal strength can be affected by humans in any handheld. Had Apple anticipated this problem prior to the release, you can bet they would have had a more PR peppered and prepared statement ready to go on launch day. Instead they come out sounding foolish.

As I said yesterday, the technological problem makes the 1st generation of a 4th generation device look a bit like alpha hardware. The shoddy PR response is making this look like a company that is desperate, defensive, and in denial. To be fair, even some harsh critics are saying they are seeing improved connectivity (when they are holding the device “the right way”) so keep in mind there is more to discover about this issue.

Speaking of “right way” and “wrong way”, I’d like to dispell what I think is a myth here about this being a left handed issue. I’m right handed. But I use the phone in both hands and frequently hold it in my left hand while my right hand is interacting with the screen. I also frequently hold the phone in my left hand when I do have it at my ear to talk into it. So, I just don’t see this as a left handed issue. Those who suggest it is, need to add a little more right brain thinking to their left brain logic.

Apple’s Bumper approach (or for that matter any case) might be a real solutionf or those who don’t mind using a case.  It erases the problem in my situation, but in essence it is a band aid approach. And who knows, maybe band aids work just as well, given that we’re hearing about solutions ranging from scotch tape to finger nail polish. But the real test of Apple’s might PR and Marketing machine will be when we start seeing companies that manufacture cases advertising that their product helps signal strength.

There may be a technological issue here that is a problem, but the poor PR approach to handling it is turning Apple’s usually carefully managed machine into a laughing stock.