Okay, Microsoft, I admit it: I am impressed. As of right now, I expect to make the new Surface my next Windows tablet. I just wish it didn’t look like it was designed for people who don’t like tablets. 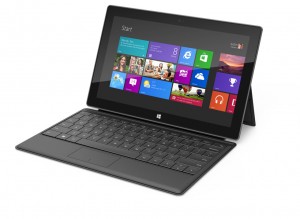 After reading the news tonight, I looked through the teasers on the new Surface website with great zeal. Concrete details are lacking at this point, but the designs and usage ideas look incredible. Built-in kickstand. Angled camera for hands-free recording while it sits on a table. The prime feature is the super-slim keyboard Touch Cover and Type Cover. There’s not one image in the gallery without them. Hmm… starting to see a pattern here.

Look, I get it. The concept of Windows on a tablet is a new and frightening prospect for most people. Push them too hard with a form factor that’s too tablet-y and they’ll get scared off. To help bring them around, you need to give them something familiar. But does it really need to look like a notebook in every image in the gallery? Must it stand on a flat surface in nearly every part of the “About” page? From what’s shown, you’d almost never know the new Surface was a tablet. 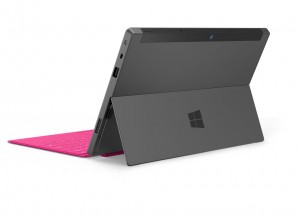 Surface, still sitting on a table

On top of that, it’s sporting the 16:9 aspect ratio for the express purpose of showing widescreen video. In landscape mode. Nothing wrong with using tablets in landscape mode. That’s what I use most of the time. I’m just not a fan of making the screen so wide that it’s the only orientation that works.

That said, while they’re doing their best to hide it, the new Surface is a true slate that doesn’t need a keyboard and, in the Windows 8 Pro model, supports active pen input. Perhaps if I wasn’t so excited for that, I would not be disappointed that they’ve chosen not to promote it.