The New Yorker released its tribute cover of Steve Jobs, which will grace the October 17 edition of the magazine. In a blog post, The New Yorker shows that the cover will depict Steve Jobs meeting Saint Peter at the pearly gates. Saint Peter is using an iPad, apparently using it to do a little research before deciding if Jobs will be admitted to heaven or sent to a place with a warmer climate.

There’s only one problem here: Steve Jobs was a Buddhist. 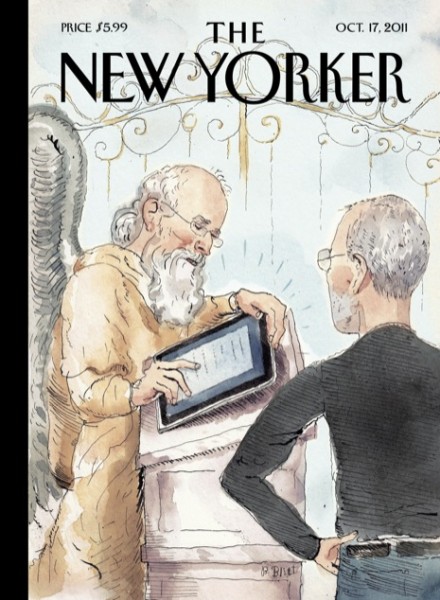 I’m sure The NewYorker means well by devoting a cover to Apple’s co-founder, but this illustration smacks of ignorance. Yes, the New Yorker’s known for satire, but is this really the right way to approach it before his family’s even held services for him? How about showing Steve Jobs a little respect by at least depicting him with a religious idol he’s believed in?

Anil Dash, a writer and entrepreneur tweeted the following in reaction to The New Yorker:

Always annoys me when non-Christians are portrayed as reaching a Christian heaven when they die. It’s not a compliment.

Each religion has its own theory of what happens to us in the afterlife. Whatever your beliefs (or lack of religios beliefs) are, it’s an ultimate sign of disrespect to be memorialized in a manner which doesn’t reflect how you lived. You wouldn’t place a a cross over a Jew’s grave or hold a Catholic mass for an atheist, would you?  The New Yorker most certainly wouldn’t dare depicting a deceased celebrity in any stage of Islmaic rites unless its editors were 1000% sure he was a Muslim.

It’s wrong for The New Yorker to either assume Steve Jobs was Catholic or simply ignore his religious beliefs and depict him in front of the pearly gates. Why couldn’t The New Yorker do just a little bit of research and maybe depict him interacting with Buddha under a Bodhi tree?

What do you think about The New Yorker’s tribute to Steve Jobs? I think there’s a bit of ignorance on The New Yorker’s part here. The magazine’s publishers should illustrate a more fitting cover if it they hope to honor Steve Jobs.

Apple co-founder Steve Jobs died Wednesday, just a day after his colleagues introduced the iPhone 4S. He resigned from his role as Apple’s CEO just six weeks ago.