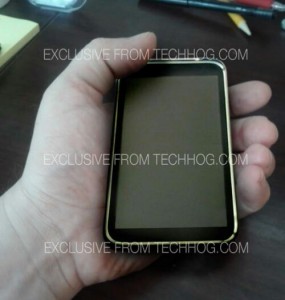 The next-generation Nexus smartphone from Google, the version to succeed the current Nexus S from Samsung (and Sprint’s Nexus S 4G variant), may be running the next version of Android known as Ice Cream Sandwich and will debut sans buttons, capacitive touch or physical.

According to Techhog, Google is requesting proposals from both HTC and LG for the next-generation Nexus smartphone, which would be the third-generation model. HTC had created the first generation Nexus One smartphone, and Samsung had followed with a Nexus S. The leaked image shows a device made by HTC–the earpiece speaker and overall design looks like something that would come from HTC as it bears a certain resemblance to the HTC Thunderbolt, the HTC Inspire 4G, and the HTC Sensation.

Without buttons on the device, the potential is huge. Not only would it be possible to use the device in any orientation and rotate the device in all four directions, but also the potential for the display to be larger without increasing the overall height and width of the phone is there as well. Without buttons occupying room on the front fascia, the next generation of Android devices could push screen sizes of 4.5 inches, like the current Samsung Infuse 4G, but maintain the overall dimension of a 4- or 4.3-inch smartphone od today.

Ice Cream Sandwich, as the next version of Android, will merge the Android Gingerbread–currently for smartphone–build of the mobile operating system along with Android Honeycomb–made specifically for tablets. As such, like Honeycomb, the smartphone edition of Android will not need Android navigation buttons–up until Android Gingerbread, smartphones currently have either 3 or 4 Android navigation buttons and many devices, like those from HTC, come with capacitive touch buttons while some like the Droid Charge or Motorola Droid X2 debut with hardware buttons.

The benefit to going button-free, according to Google when the Motorola Xoom was released to debut Android 3.0 Honeycomb, is that it would make it easy for users to use their devices in whatever orientation they want, whether it be portrait or landscape, and still have the navigation button options conveniently located in the proper place.

On Honeycomb, rather than taking the portion of the front fascia just below the screen for buttons, navigation buttons are built into the operating system as soft buttons and part of the touchscreen experience. On the screen itself is a bottom bar for a number of buttons on the bottom left corner, similar to the Start menu on a Windows machine. On the right lower corner opposite those buttons are the time, notifications, and settings options. The top right corner, usually, is where the search button has migrated to.

While the positive side to this is that the device can be used in any orientation and the buttons will always be in the right place, the downside is that the search button is now a far reach away. Users would really have to move their hand–and arm–to access the search button.

It’s unclear at this time if Google will continue to maintain the user experience that Honeycomb has, or if there will be tweaks when Honeycomb is merged onto the smartphone when Ice Cream Sandwich is released.

Does the Nexus 3–or whatever it will be called–excite you? It definitely looks like a mini tablet!