A few years ago Microsoft first showed off its “three screens and a cloud” idea where users would be able to start a game on their Xbox 360 and pick up where they left off on their Windows Phone. Sony beat Microsoft to it with the PS Vita, but now we finally have a game that takes advantage of Microsoft’s dream, on Microsoft’s platform.

Sonic the Hedgehog: Episode II will be the first game to offer such a feature. In the new Sonic game you’ll be able to play on your Xbox 360, pause and save it, then launch it on your Windows Phone and pick up right where you left off on your TV. The game will also be available on PlayStation 3, PC, iOS, and Android, though none of those platforms will have the same feature as the Xbox/Windows Phone versions. 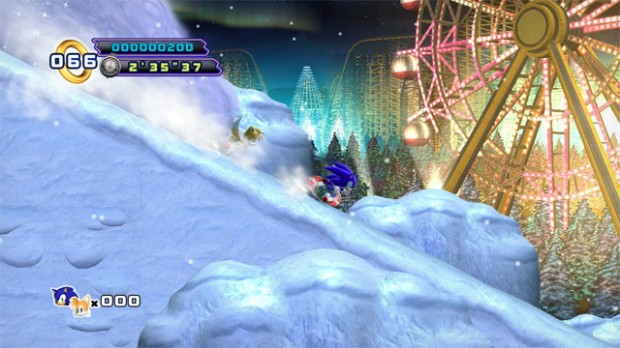 The game itself will complete the Sonic 4 series. The first episode wasn’t particularly well received among gamers, but the new game should hopefully be able to recapture the greatness of the old 2D Sonic games. Although that line is used with every new Sonic game, so it’s not wise to be too optimistic.

With all of Microsoft’s products moving towards Metro it wouldn’t be a surprise if the company tried to get more developers to put in syncing features like this one. This is the sort of feature that can only happen on unified platforms such as Microsoft’s.

Until that happens, there’s always OnLive, though requires a fast Internet connection which isn’t always available.