With a lot of folks salivating over the Samsung Galaxy Tab and other potential iPad competitors, even with recent statements by Google that this first wave of competing products will be running and Android OS not optimized for Tablet goodness, the numbers game seems to point to openings for those wanting to ride the Tablet/Slate wave.

You’ve already been hearing this from many sources. A recent NPD Morgan Stanley report pointed towards a decline in Notebook sales and Best Buy’s CEO is saying that the iPad is “cannibalizing” those same sales. It’s no wonder we’re hearing that Best Buy is planning on selling iPads in all of its stores this holiday season and not just the stores with other Apple products. And of course Best Buy is moving to have other Tablet/Slates on its shelves as well.

So much of the focus of all the current analysis is on the iPad as the cause of this, and much of that is more than deserved. But I think it is also due to two other factors as well. The economic downturn knocked a hole in many wallets, and let’s face it Notebook and Netbook innovation has only been incremental at best.

Let’s face it, Apple, Samsung and others as well as retailers are hoping that there are going to be lots of Tablets and Slates under Christmas trees this December. There’s no word yet on how wide of a net Samsung’s will cast for its Galaxy Tab, though I imagine we will see it everywhere given the deals with all four us carriers announced last night. That said, Samsung threw a curve that says in the US the Galaxy Tab will not have voice capability. Who knows what that means for the carriers and their contract plans. I know folks like to give gifts that give all year long, but I don’t think they want to give new contracts to those who might already have one with a carrier that forces the giftee to pay more all year long. It could be appealing but who knows. The question still remains how much choice will there be this December and is that choice going to be enough? Or are we just looking at a preview of 2011?

Crazy times, but I’m guessing they will just get more so. 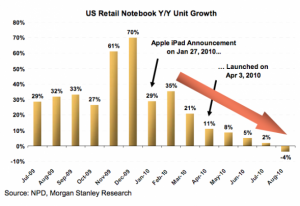