(This is a part of a continuing series of my work directing the play, Othello, by William Shakespeare. Here on GottaBeMobile.com I post entries to this series that deal with mobile tech solutions to our production process and my directorial process. More theatre related entries are posted on my personal blog, Life on The Wicked Stage: Act 2.) 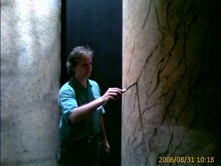 Last night we took the stage for the first time and it was thrilling. We focused our work on our Act 1 of Othello (which runs from the beginning of the show through Shakespeare’s Act 3 scene 3.) Til, our set designer, and his crew did a remarkable job getting the entire set in place for this rehearsal over the last two days, so that I was able to see the complete the picture and adjust stage pictures throughout. What’s better is there were no bad suprises, only good ones.

Our musical drumming conceit is not only working, but working brilliantly, as the drumming resonates throughout the theatre, I was able to fulfill my original vision by being able to stage the drummers as a visual part of the action, which adds a whole new dimension to the piece.

I tried a new technique of taking notes last night. Using my Sprint PPC 6700, I hooked up the headset, opened OneNote Mobile, and voice recorded notes for several sections of the the show. Then when I returned home after the rehearsal, I synced up the 6700 with my Tablet PC and was able to listen to my notes. I did this sporadically throughout the night, as we were fixing a lot of things on the fly, but this was a test to see if it would work for rehearsals later this week. Normally, I’m taking notes in digital ink in OneNote and reviewing them later. This voice recording method allows me to keep my eye on the stage and not what I’m writing. It will take longer to review, so I don’t know the result of this yet. But like all things mobile, it is a neat experiment