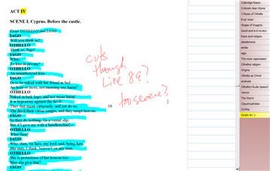 One of the things that drives me crazy about doing Shakespeare, or any of the great classics for that matter, is that modern audiences are extremely reluctant to sit through a play for more than 2 hours these days. The communal attention span is too short, and no matter the Bard’s direction of “two hours traffic on our stage” it is difficult to perform any of his plays under three hours.

In our production of Othello, we are aiming for 2:30/2:40. Which means lots of cutting of the script. Prior to rehearsal beginning I had made cuts and edits before giving the cast their scripts with the caveat that more would come as we worked. 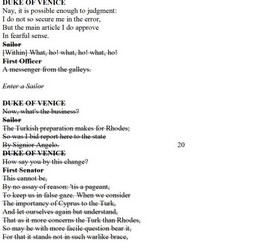 I’m finding that “more” to be exceedingly difficult to make. Yesterday we made some significant cuts in Act IV that will streamline a lot of the action. They are good cuts, but painful ones.

From a Tablet PC perspective, the earlier cuts (before scripts were handed out, were made using a “strike through” the lines that were cut. The cast received a copy of the script with the lines cut so they could view the context.

Now that we are in rehearsal, I make the cuts in OneNote 2007 Beta. I have the script printed into OneNote and use the highlighter to highlight the potential cut. Different highlighter colors allow me to differentiate whether this is a cut I will make, or one I’m thinking about. I also use Ink to make any edits in the margins. We then work with the cuts in rehearsal to decide if they work or not.

Today and tomorrow we make more cuts in our attempts to streamline the action and keep the audience with us.

(Note: You can follow non-Tablet PC related entries into The Othello Diaries on Life on The Wicked Stage: Act 2.)