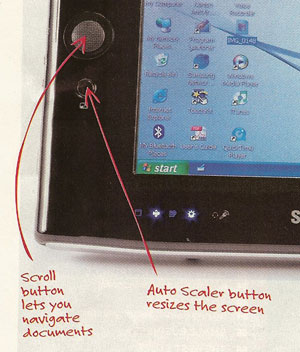 I just received the July edition of PC Magazine. Normally, this isn’t something to write home about. I’ve gotten so fed up with PC Magazine, I normally just throw it away after checking the mail box. I don’t know why, but today I decided to flip through it. Here is what hit me as I flipped the pages:

A couple pages past the table of contents, I run into a full page ad for the LS800. A couple pages over is an ad for the M400. On in to the First Looks section, and they are talking about Q1. Further in is an ad for an Acer Tablet PC and then another ad for the Fujitsu Tablet PCs. Intermingled among those ads is the real meat – their articles. They have made some subtle, but important changes.

First, all of their writers have penciled caricatures next to their by-lines. They are very well done and they send a more personable message than those old passport photos. They look hand drawn – just like what someone would do with a Tablet PC.

Next, they are doing some great stuff with the call-outs in their pictures. They are using a natual handwriting font for all of their call-outs and then drawing arrows and circles around pictures, similar to what you and I do with the Snipping Tool. It all looks and feels very natural and free flowing – almost like they are writing on the magazine and marking it up in front of us – just like what you would do with your Tablet PC

Now, I know they are not using a Tablet PC to do the call-outs and mark-ups. But the overall impression they are leaving with the reader is a good one. They are approaching their content with a much more natural, personable look, and at the same time sending a subtle message (whether on purpose or not) about Tablet PCs. Well done.