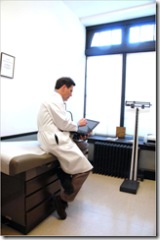 In this article from the New York Times, Steve Lohr tackles the cost of going paperless and the financial implications of doing so for small medical offices. For one doctors office, the costs of implementing electronics medical records and other technology has not paid off in dollars and cents. The benefits have been more in the intangible area: finding patient records quicker, communicating with insurance companies, and overall helping the doctors become more adept physicians.

From this picture, Dr. Baron from the article, is using a Toshiba Tablet PC.

In 2004, Dr. Baron and his colleagues made the transition from ink and paper to computers and electronic health records. They were doing what health care reformers had been advocating for years. But the arithmetic of investing in health-information technology is daunting, especially for small practices like Dr. Baron’s. His office spent $140,000 on personal computers, including tablet PCs, servers, software and installation.

The office’s annual technology costs, he said, were about $50,000, including maintenance and technical support, and he plans to upgrade the three-year-old computers at a cost of $54,000. Those costs do not include the lost productivity in the first year, when the staff was learning to use the new technology.

Dr. Baron’s office has saved money Ã¢â‚¬” in transcribing medical reports, for example Ã¢â‚¬” and his practice now handles its 6,000 patients with three fewer office employees. He described other benefits, mainly the ability to find information quickly for patients, hospitals, insurers and labs with a few keystrokes.

The technology, Dr. Baron said, has also helped make him become a more adept physician. But it has not yet paid off in dollars and cents: the savings in salaries is less than the costs entailed in computerization. ““It is a high-risk venture,Ã¢â‚¬Â he said, ““and you do it at your own financial peril.Ã¢â‚¬Â

Thanks to GottaBeMobile.com reader and forum member, Mickey Segal, for the article. You can comment on the article here.