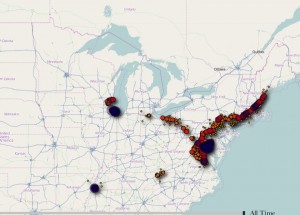 Ever since the discovery of the hidden file on iPhones and iPhone backups prompted an uproar from those concerned about privacy issues, the story seems to keep building. Google and Apple have both been summoned to give answers to Congress, and if you’ve been following the news, you also know that Google and Apple aren’t the only ones who may or may not be doing bad things with data that tells where you are. Microsoft and Nokia (and I would guess everyone else in the mobile gadget firmament) are also accused of doing this as well.

My views on this are well chronicled, but obviously this issue strikes a chord with many who see things differently. Yesterday I read a very interesting interview with Skyhook Wireless CEO Ted Morgan about the issue. Skyhook Wireless gathers mobile location data as a part of its core business, and as the interviewer points out, his business model is actually threatened by Google, Apple, et al doing that kind of thing, so there’s a context within which you need to read the interview. Nevertheless, he offers up some interesting food for thought in some of his comments.

For example, (and these are his words not mine) he claims that Google pings Android phones 1000 times a day for this kind of location info. And of course the reason that they are doing so is to find ways to better serve you relevant advertising. Which as we all should know is what all of this is really about anyway.

So, if you’re interested, read the interview on Business Insider for yourself. Something tells me this issue, regardless of how you or I may feel about it, isn’t going to go away anytime soon, and reading other points of view should probably be a good thing.