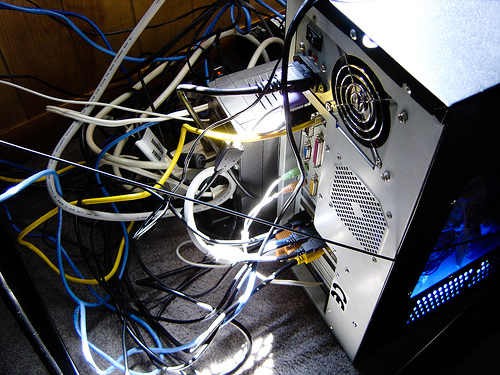 We’re just about done shuttling between two residences. The major moving is done but we’ve still got some little crap to take care of plus cleaning out the old apartment. Last night late I gave a stab and setting up the home office. As far as stabs go it was akin to using a toy rubber knife. Once I opened up the box of cables and gear I just went bleary eyed and decided to put it off for a day or so.

We’d previously decided to jettison the Windows desktop from the office but we back tracked on that idea. Turns out my wife needs it for some document creation using Microsoft Publisher so it will be getting set back up. As we were taking down the office I labeled all of the cables and gear to make for an easy rebuild. But I have to tell you, there’s a small mountain of cable to be stung around.

Reading about Intel’s Thunderbolt (or Light Peak) and the promise that it brings to make connecting peripherals and the like up to systems has me salivating. Sure the promised 10GB of throughput is part of what makes my mouth water. But having gone through a tear down and now about to experience a rebuild, losing some of these cables and connectors would make life quite a bit easier. It would certainly make our home office look more attractive. As a side note, my wife insisted on wiping every piece of cable clean before we packed it up. I love her for that. But it took her quite some time.

Don’t get me wrong, I’m sure we’ll still have cables for sometime to come. Apple released its new MacBook Pros today and at the moment it is the only device shipping with Thunderbolt. So it will take some time for Thunderbolt to become mainstream, and even more time for me to find the funds to take advantage of it.

Here’s a link to one of the articles I read about Thunderbolt. What are you thoughts about this new technology? When (if ever) will it become a standard that you look for when making gear purchases?