The Red Flag Is Coming: China's Xiaomi Gets Endorsed by Apple's Wozniak

So far, popular smartphone brands in the U.S. have largely been dominated by Apple, Samsung, and smaller rivals, with Chinese brands taking a backseat with the low cost market. However, that may change soon given Xiaomi‘s ambitious plans to conquer the world and Apple co-founder Steve Wozniak giving the Chinese brand a ringing endorsement.

“I’m playing with mine. I like it so far. I’ll tell you if I have problems,” Woz said in a tech talk referring to a Xiaomi Mi3 phone that he was given in China and reported by TechinAsia and Phone Arena. “Xiaomi has excellent products. They’re good enough to break the American market.” 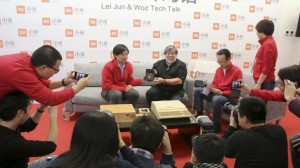 Though Wozniak had co-founded Apple Computers along with late partner Steve Jobs, the Apple co-founder had not been shy in the past about using competing products, including a number of Android smartphones, Microsoft’s Surface tablet, and Nokia’s Lumia phones running Microsoft’s Windows Phone operating system. It looks like the latest endorsement from Microsoft may help Xiaomi enter the difficult American market.

So far, smartphone and mobile brands from China in the U.S. have not fared well against more recognizable names like LG, HTC, Apple, Samsung, Sony, and Motorola. Huawei and ZTE are largely considered more budget entries in the market, though this may change as China’s Lenovo, which inherited IBM’s ThinkPad brand after the acquisition of the latter’s PC business, is also eyeing more established western markets. Oppo, also based in China, is also beginning to sell its flagship smartphone unlocked in the U.S.

As western companies like Apple attempt to tackle the growing Chinese market, China’s brands are also simultaneously trying to conquer the American market.

Hugo Barra, Android’s former head of product management, was poached by Xiaomi in an effort from the Chinese firm to expand globally. Xiaomi had often been compared to Apple, and the hiring of Barra will give it a stronger reputation as well as a recognizable public face as it eyes global expansion.

“The defining characteristic of Xiaomi is that in its DNA is a focus on users,” Barra said late last year in an interview with Kara Swisher with All Things D at the time. “Every question, every piece of feedback, gets a response, and a significant number of new features were suggested by customers.”

Quality, affordability, and usability are part of Xiaomi’s culture, Barra said, and eventually the company hopes it could increase its profit margins.

Still, when asked if Xiaomi could compete effectively against Apple, Woz appeared a bit more reserved.

“Xiaomi is in a very different age. It’s hard to compare apples to apples,” the outspoken Woz joked.