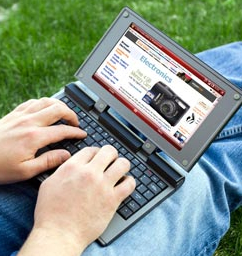 Let’s face it, the smartbook will become the inevitable next step in the evolution of our two favorite mobile gadgets: the smartphone and the netbook.  As our demand for mobile Internet content continues to grow, smartphones become more powerful, and mainstream consumer adoption of smartphones expand, the smartbook stands at the threshold.

What exactly will the smartbook be and do?  The smartbook will be a convergence device; it will be the combination of a netbook and a smartphone.  You can expect the smartphone benefits of instant on, longer battery life, low power consumption, access to the Internet/all of your personal documents, and smaller size with the traditional keyboard and screen real estate offered by current netbooks.

A few devices have tried to bring forth the smartbook revolution but came up short.  While their attempts were noble and innovative, they largely failed to hit the mark.

The Celio REDFLY is one such combination device.  The REDFLY literally takes the information displayed on your smartphone and blows it up on a larger, netbook-styled device.  The benefit of the REDFLY model is that a separate data plan is not required.  The REDFLY simply uses the same Internet access as your smartphone.  Whether wireless carries would allow this to continue remains in question, but it seems difficult for them to monitor unless data usage increases significantly.  Our friend, James Kendrick, of jkOnTheRun.com recently reviewed the REDFLY with his BlackBerry and walked away disappointed.  Despite the unimpressive results, the model is impressive.  Time will tell if the “harness the power and Internet connection of your smartphone” design succeeds or not. 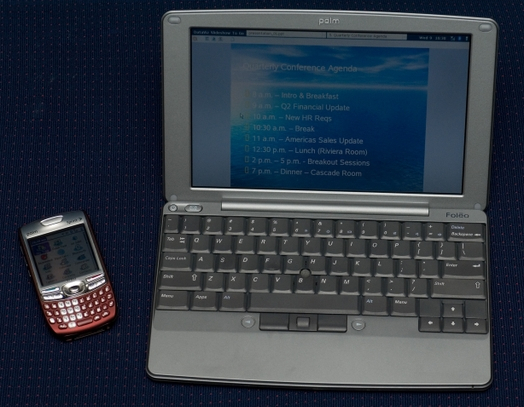 Another device that was before its time but never made its way to market was the Palm Foleo.  The Foleo was a linux-based subnotebook with lower specs than mainstream Intel Atom netbooks.  The idea was that the Foleo could be a companion device that would sync with your Windows Mobile or Palm Treo smartphone.  The editing and creation of documents would be easier for mobile professionals using a larger, laptop-styled device.  However, companies such as Asus and Acer beat Palm to the punch by releasing higher performing and lower priced netbooks.

The newest player to enter the smartbook market appears to have the financial resources, operating system, Internet apps, and device to make their product succeed.  Google’s own offering of Google Voice provides the smartphone + smartbook link.  Google will soon introduce a smartbook that is expected to cost much less than traditional netbooks, rely on a cloud computing model, and be heavily based on consuming Internet content.  The device will run Google’s own streamlined operating system, Chrome OS.  The recently leaked specs of the the Google machine are impressive: 64 GB SSD, 2 GB RAM, NVIDIA Tegra 2 Chipset/GPU, and a possibly priced entry unit that comes in at under $200.

Perhaps the only roadblock the smartbook will face is the burgeoning tablet market.  Products such as the rumored Apple Tablet, the JooJoo (formerly the CrunchPad), and the many Android supported tablets may determine if touch trumps the smartbook design.  Regardless, our smartphones are becoming more sophisticated and our demand of mobile Internet content is increasing.  Expect one of these devices on my desk soon.