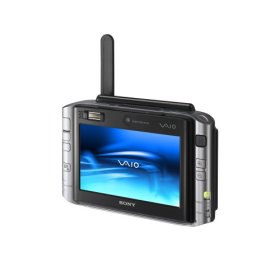 From everything I’ve seen and read about the Sony UX180P Micro PC, this looks to be a killer mobile unit. There are two things about this unit that make it stand out from the UMPCs – integrated keyboard and built-in WWAN. Throw in the video camera and still camera, and you are now taken over the top. You are paying for it, though.

Doing a quick price comparison ( not getting in to total feature comparisons) :

Like I said, it is on the high side compared to the UMPCs on the market, but it looks to be such a sweet device, capable of meeting the most important needs of going mobile without sacrificing much. Is it worth $601 more than the Q1? With Edge support (via a SIM card), video camera, still camera, faster processor, but no Tablet PC support ( yet ), I can honestly say that it approaches a “yes” in my corner. However, unlike James Kendrick, I have not had the pleasure of actually using one. I have used TabletKiosks eo, so this keyboarding option looks to be a better overall design. For the Tablet PC guy in me, though, there is one critical piece missing: the Tablet PC OS. Gotta have it, and Sony totally messed up by not including it.  That one should have been a no-brainer. That’ll change when Vista comes out, but I don’t ever see it being officially called an Origami or UMPC. I bet they continue to use their own interactive panel. BTW: since the WWAN is through a SIM card, it should open up possibilities of using other providers.

Looking for more info on the UX180P Micro PC? Checkout www.MicroPCTalk.com – they have some good info. Sony has a cool interactive tour here. Amazon.com has the UX180P available for pre-ordering at $1799. And of course, JK has been bragging blogging about it, too.