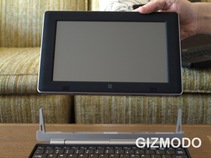 At this winter’s DEMO 09 a company called Always Innovating is going to show off its Netbook that they call a Touch Book. Yes, it has a touch screen, but there’s no word yet if it is has a capacitive digitizer and multi-touch. Which is interesting because some of the coverage says it can run some of the same games as on the iPhone using a 600 MHz TI OMAP  3 processor that is built around ARM technology and is running an Open Embedded Linux platform and can render OpenGL 3D graphics. Always Innovating is calling this a ““Netbook Reloaded.Ã¢â‚¬Â The screen is 9.4 inches and when it is detached it weighs about one pound.

But catch this, it has a fully detachable screen. Yep, that’s right. Kind of reminds me of the HP tc1000 series. Intriguingly when it goes up for pre-order this week it also will also have two prices: $300 for the Tablet only and $400 if you want the keyboard/dock. The device weight less than two pounds and has a battery life of 10 to 15 hours.

More specs after the jump, and Gizmodo has some video and many more pictures.