Each and every year we see technology advances which yield new gadgets, new ways of doing things, and more debt on our credit cards. We all get excited by the shiny and the new. Gadget lust sets in and drives us all to distraction. CES is just around the corner as are the other big trade shows and they fuel the lust. Now that we’ve flipped the page on the New Year, one of the things I’ve discovered about myself in the year just past is that when I find a technology that works for me, I stick with it. Often that means not trying out something new, simply because its new and/or different. That’s a big and recent change for me. I used to attempt to try every new thing coming down the pike. Occasionally that means spending my gadget/App dollars on upgrades to products already in my gadget bag, rather than the latest trend or something new. Surprisingly, I’m glad I have taken this approach, as what appears to be the next better mousetrap sometimes isn’t, and I find comfort in relying on what works for me. In an increasingly busy schedule, there is also comfort in not having to teach myself new tricks to do the things I need to do everyday. 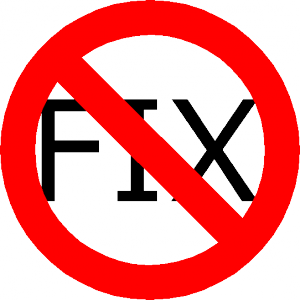 Don’t get me wrong. My gadget lust will still lead me to make a purchase or two throughout the year on something new. Occasionally that yields a new arrow in my quiver. But this year I discovered that I’ve been sticking with a few gadgets and a few technologies that serve me well. None of them are perfect, but all of them work in the various scenarios I put them through. There’s that maxim out there that says, “if it ain’t broke, don’t fix it.” I guess for me that gets amended to “if it is still serving its purpose, why make a change.” So, here’s a list of what I’m hanging on to as the New Year begins, and with it a few companies that I’ll stick with because in the end their products continue to work well for me.

GBM readers know that I’m an iOS device user. I have been since the first iPod Touch. That was followed by the second iPhone, then the iPad, and now the iPad mini. I’ve owned every iPhone since the 3G and every iPad since the first one. I’m now on my 3rd iPod Touch. I’ve used Android phones and Tablets. With the exception of the Nexus 7, none work for me in all scenarios as well as their iOS counterparts. I really enjoy the Nexus 7, but it’s not the first Tablet I grab when I’m headed out the door. That distinction now belongs to the iPad mini. The iPad mini has hit my mobile sweet-spot. For work though, when I’m in meetings or rehearsals the larger iPad does the note taking chores. I prefer the larger screen for Inking. When it comes to reading, researching, or browsing I alternate between the two. For playing music I still rely on an iPod Touch. I just don’t like to load up a phone or Tablet with music. Although my music is usually purchased via Amazon, I’ve got a pretty extensive collection of legally ripped music as well as music I need to have available from my collaborator on theatre projects. All of that flows through iTunes onto the iPod Touch, along with podcasts and audiobooks. Sure I could stream most of that through Amazon or Google, and some of it through other sources like Spotify. I could also do that with iTunes Match, although that’s not really a streaming solution. Instead I dump it all to the iPod Touch and play it locally from there whether in the car or somewhere less mobile.

For what it’s worth, these iOS devices have become go to devices in my arsenal. I can’t see myself changing that course in the near future, but then you never know. To be brutally honest, iOS is showing its age a bit and Apple still hasn’t figured out the Cloud or Sharing yet. But there is a comfort zone that I’ve established that I keep coming back to after flirting with other mobile platforms.

I’ve owned most of Jawbone’s Bluetooth headsets. The ERA is the latest and I think its about a year old or so. While I’ve tried other makes, the Jawbone headsets have always worked well worth well for me, and at this point I’ve stopped even looking at other makers.

I picked up a Twelve South Compass iPad stand when they first came out over two years ago. I happened to be standing in an Apple Store when the first shipments arrived. I’ve been using it since and although I’ve tested a number of different iPad stand solutions, the Compass is the stand that I take with me when I’m on the road. It’s easy to tote and easy to set up. It does make TSA officials look twice when passing through security at airports though.

This App which I use on iOS and Android devices is my aggregator of choice allowing me to get a reasonably accurate quick glance on what’s happening in the world’s I pay attention to. The recent Android app update is designed for Tablets but is a bit slower. It still works like a charm on iOS. It may be a useless worry, but if Twitter and Flipboard fall into a spat with each other I worry about how that will affect one of my favorite Apps.

i use it on every device I own even though I play with other document and file transferring solutions. I always come back to Dropbox primarily because so many Apps that I use work with its API.

While I don’t work as much as I used to in Microsoft Office, many folks I work with still do. There’s lots of excitement out there about the potential for a Microsoft Office for the iPad, and of course that was the big selling point for the Surface RT. But as I’ve gone through this year relying more an more on the iPad, I’ve discovered that QuickOffice does what I need when it comes to working with Microsoft Office documents 90% of the time. It works well with Dropbox (and other third party file syncing options) and is available for both iOS and Android.

For better or worse Amazon has me hooked when it comes to eBooks. The Kindle App works on every device I own. In fact if I got a new device it would be one of the first Apps I install.

There are other things I use certainly, but the technologies listed above are things that I have been using for longer than the last year that I anticipate using going forward. There might be something new that comes along that might alter my comfort zone, but somehow I doubt it.