Mobi must be very desperate these days. The company just launched a campaign encouraging family members to eavesdrop on each other with its Pure Sounds baby monitor and use what they hear to embarrass their kids in public. What a wonderful promotion for Mother’s Day.

We receive hundreds (sometimes thousands) of pitches every week here at GottaBeMobile, but this is by far the most boneheaded. As a parent I find it creepy and offensive.

The email blast features a mother kissing her baby in front of Mobi’s baby monitors. A beautiful woman, a cute baby and some gadgets…what’s not to like?  Well, apparently that baby’s in for a rough life…

The text leads off warning us of an ‘unusual’ product launch. Unusual indeed. The company is asking people to dream up ‘out of the box’ ways to use the company’s baby monitors. One example given is “hiding the transmitter in your teenager’s room during the next party and using the discoveries to publicly humiliate them.” Another brilliant idea is “to listen in on your husband’s next poker night with the boys.” The campaign encourages people to visit the company’s Facebook page and  share their own creepy ideas. Nobody’s actually shared their own ideas on Mobi’s Facebook page, but I’m guessing there’s going to be some gems. 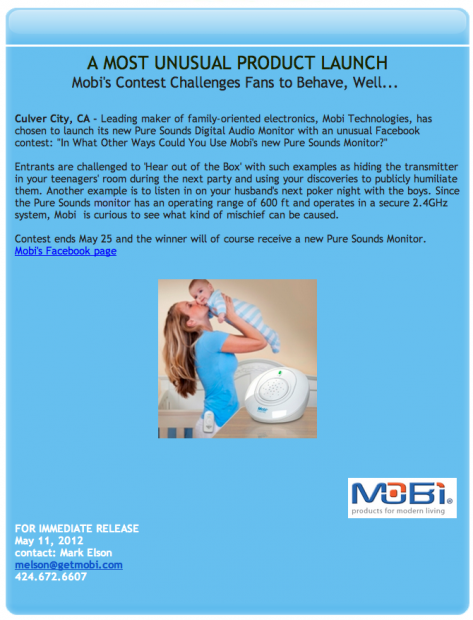 As the father of a one-year-old I take notice of how companies present themselves. I generally don’t trust my son’s safety with products produced by companies that don’t do a decent job presenting themselves. I’m actually quite interested in baby monitoring solutions since we live in a multi-story house and some of the  monitoring solutions I’ve tried don’t have as much range as we need. But it’s tough to take a company seriously that encourages moms to invade others’ privacy. The thought of a mom eavesdropping on her teenager so she could embarrass him is about as awkward as this marketing campaign.

I’m not sure who’s brilliant idea it was to launch this campaign after business hours the Friday before Mother’s Day, but if they’re in charge of marketing at this company it’s little wonder why I’ve never heard of its products before.