The year of the tablet? Wrong question

Craig Pringle has authored a really intriguing article on ““the year of the tabletÃ¢â‚¬Â. Warner has also followed it up with his own thoughts.

While I agree with the premise that Craig focuses on and agree that the past successes look good for the future, I tend to agree with Layne that 2005 was the year of the Tablet PC hardware, but 2007 and 2008  will be the years of the Mobile PC. 2006, to me, is proving to be groundwork for 2007 and 08.

Tablet PC functionality was given its’ stamp of approval with the introduction of the Lenovo X41 in 2005.  As we begin to see more notebooks offer tablet as a feature, I think we will begin to think of them less as Tablet PCs and more as ““supporting inkÃ¢â‚¬Â . The UMPC / Origami is a perfect example Ã¢â‚¬” it supports ink, but you don’t see it being marketed as a tablet pc. It is a different device, a lifestyle type of device. Yet it supports ink. We won’t talk of the TabletKiosk eo as a Tablet PC.  And in late 2007 and beyond, we won’t refer to tablet pcs Ã¢â‚¬” they’ll just be different types of mobile devices that will hopefully support ink as a feature. I predict that we will see at least one new major OEM finally add tablet as a feature to their notebook line in 20007. Get used to that phrase ““Tablet as a featureÃ¢â‚¬Â

We will begin to think of mobile devices as having ““tablet / ink featuresÃ¢â‚¬Â, but not necessarily calling them tablet pcs. The briefing in Redmond that I attended in February was called the ““Mobile Platforms Division Partner BriefingÃ¢â‚¬Â , not the Tablet PC Division Partner Briefing, even though a lot of time was focused on inking and tablet functionality in Vista and developing apps for the mobile device.

The main reason that talk we have of ““when will tablet take offÃ¢â‚¬Â, ““ look how tablet is moving nowÃ¢â‚¬Â, ““ the year of the tabletÃ¢â‚¬Â is misplaced is largely due to the presentation that Bill Mitchell gave to the Mobile Partners Briefing in Redmond on Feburary 1st. You’ve seen the photos of the slides, seen notes from the  briefing, etc, but when you really examine Microsoft’s vision for the Mobile PC compared to where they have been with Tablet PC, you’ll understand why I am saying this. Take a look at the image below from Bill Mitchell’s presentation (click it to view a higher res version).  Do you see where they are going in 2007 and beyond? 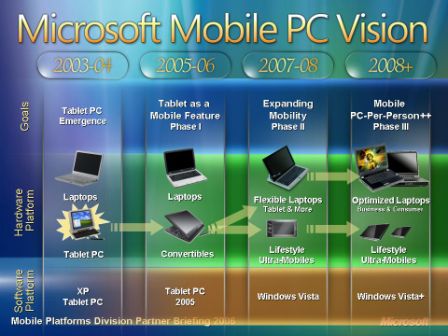 I believe focusing on ““Tablet thisÃ¢â‚¬Â and ““Tablet thatÃ¢â‚¬Â is really selling short the future of inking in a multitude of devices. The hardware will happen over time. What we are really interested in is transparency in inking functionality throughout the mobile experience from ultra-mobile device to 17Ã¢â‚¬Â laptop, from Windows Mail to Outlook, to Search boxes to the Inking on the desktop. Whether that device is a slate, a convertible notebook, touch computer, or an ultra-mobile pc, it doesn’t matter. We enjoy the ink experience and see the productivity benefits of it. We should be asking ourselves ““ are we closer to achieving ink transparency in our applications and OSÃ¢â‚¬Â? We are closer, but if Vista and Office 2007 are any indications, we still have a ways to go . If Adobe still has not supported Ink as a datatype, then we have a ways to go. Personalization of ink in Vista is getting us much closer, but when we have to rely on a third party app (www.tabletoutlook.com ) to provide ink transparency in Office, and it is not getting much better in Office 2007, then we still have a ways to go to declare  ““the year for inkÃ¢â‚¬Â. Transparencey in the experience should be the barometer for success.