They're reading Kindle on their tablets. Are you? 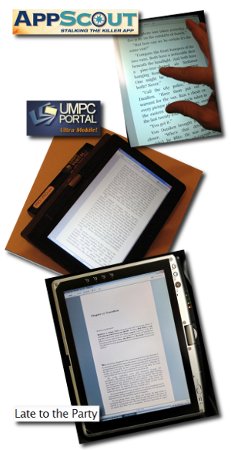 Amazon’s Kindle reader for PC has been out for less than a day, and already people are posting shots of it running on their tablets.

No surprise that Chippy from UMPCPortal was quick to try it on his ultra-mobiles. He’s showing it off on his Gigabyte T1028M convertible. Looks like a good fit on the 600Ã—1028 screen.

Jezlyn of Late to the Party loaded Kindle on her Toshiba M200 almost immediately. The side margins on huge on the 1050×1400 screen. Page width, not full page, would be a better pick for that resolution.

Last but far from least, a tablet user previously unknown to me, Lance at AppScout, has a detailed run-down of the Kindle app running on his Lenovo X200 with multi-touch. He also notes the pages look narrow on his screen at 800×1280 resolution, but pinch zooming fixed that for him.

By comparing the three, we can see a clear need for multiple screen aspect options, which we can perhaps press for in future versions. Thanks guys for sharing your literal perspectives. Anyone else have other aspects/resolutions to share?