Things That Puzzle Me 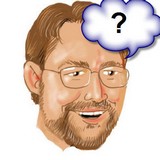 A random list of things that puzzle me these days.

Battery Life specs: Nobody believes them. Everybody publishes them. Why don’t we all admit this is just another meaningless marketing gimmick. Battery life specs mean nothing in a vacuum and less in a press release.

CRAPWARE, whether it be malware, viruses or any other exploit, is the bane of the digital age. The cure? Greater security protection that does nothing but eat up processor cycles and often feels like malware itself with all the nagging. There has to be a better way. Or are the powers that be too comfortable with the status quo? I know the purveyors of CRAPWARE are constantly on the move and defeating every thing tossed at them. I just don’t think we’re tossing enough brainpower at the problem, because in reality, we don’t want to.

When are we going to retire the phrase Customer Service as meaningless and oxymoronic?

New Product Cycles: If the Next Big Thing is already far along in development before you release the Current Big Thing, aren’t you shortening both ends of the stick? The consumers sure think so.

Some times I think those of us in the US mobile crowd are a bunch of dupes. We continue to pay high prices for broadband access that is far substandard to Europe and Asia and yet we live and die with each potential snippet of news that things might get better. Of course we don’t have much choice, which is a shame.

The harder we work to stay connected and create and use devices and services that keep us in the flow, the more complex we sometimes seem to make our lives. Where on the curve of productivity versus living life are we?