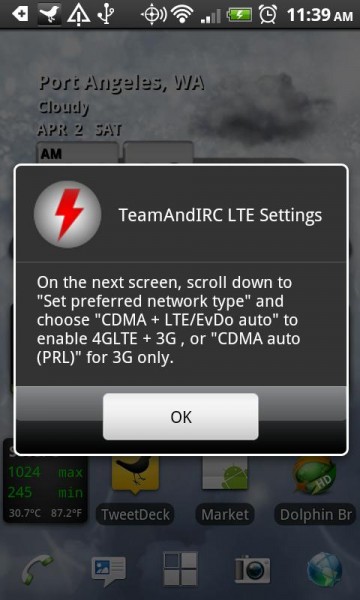 Despite its amazing speeds and the ability to access Verizon’s blazingly fast 4G LTE network, the biggest drawback behind the HTC Thunderbolt is battery life. As the first 4G LTE Android smartphone to grace Verizon’s network, the device has a short battery life of under 4 hours under moderate use–at least in my testing. Enter LTE OnOff, an app developed by a third-party developer, that hopes the remedy the Thunderbolt’s short battery life by toggling the 4G connection.

Essentially, LTE OnOff allows users to disable 4G LTE network access when 4G isn’t needed. When you’re not downloading a large file or uploading a video clip to YouTube, you can toggle off 4G LTE and switch back to Verizon’s 3G CDMA/EV-DO network to conserve battery life. You can also quickly toggle on 4G when you need faster network access as well.

While 4G phones from Sprint–the EVO 4G and the EVO Shift 4G–have had the ability to toggle 4G WiMax network to save battery life or increase speeds, the Thunderbolt was released without the 4G disabler feature. It’s understandable that Verizon wants to showcase its nascent 4G network, which the carrier is boasting of capable of 10 times the speed of 3G, the speeds of 4G really is a detriment to battery life.

The app is available for free from Android Market.