The Nokia Normandy, Nokia’s much talked about low-end smartphone running Google’s Android operating system, may never reach store shelves, but that isn’t stopping industry insiders from fawning over the device’s interface and more. 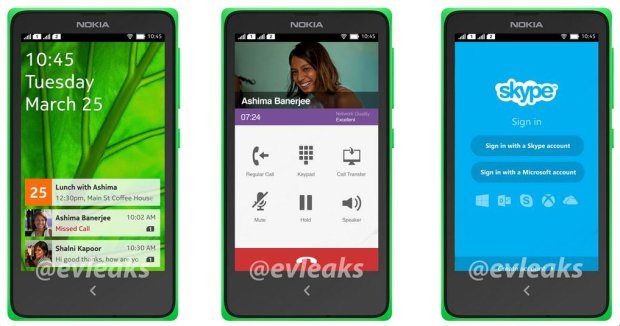 Reportedly, Nokia began preparing a modified version of Android to ship on its devices earlier this year. While the name of the Android/Nokia hybrid version of Android is not known, most rumors indicated that the operating system would be on-board a low-priced smartphone designed specifically to bridge the gap between Nokia’s low-end Asha devices and the company’s range of Windows Phones.

Many industry watchers have taken Nokia’s decision to use Android instead of Windows Phone for the Normandy as a sign that it isn’t confident in Windows Phone’s future. However, its likely Nokia opted to use Android for the device because it needed software support for the dual-SIM card slots the Nokia Normandy is rumored to have. Having two SIM card slots to access two different wireless networks is a feature that’s said to be seriously important to smartphone buyers in developing countries. Windows Phone doesn’t support dual-SIM cards.

Nokia seems to have done a lot of work to customize and redesign Android, which is a shame considering it’s entirely possible that the project won’t see the light of day. Microsoft announced that it would purchase Nokia’s Devices and Services division this past September. That deal could close any day now, giving Microsoft the authority to scuttle the Nokia Normandy and the custom version of Android Nokia seems to have worked so hard on.

What version of Android Nokia used to create its variant of the operating system isn’t known. Reports about the operating system and the Nokia Normandy project indicate that the users won’t be allowed to install apps from the Google Play Store should the Normandy actually make it to market.