This is How Microsoft Will Get You Off Windows 7

To entice Windows 7 users into upgrading Microsoft could make the biggest changes to Windows users have seen yet. Those include a revamped Start Menu that borrows the Live Tiles from the Windows 8 Start Screen, a user interface that completely adapts to user’s machines and input methods. The push could also include a free upgrade for Windows 7 users.

Reportedly, this new adaptive interface and more will be included in Windows Threshold, the next version of Windows after Windows 8, according to ZDNet.

Allegedly, Windows Threshold laptop and desktop buyers won’t get the Start Screen interface that now dominates Windows 8. Instead, Microsoft will completely disable the Start Screen for devices that don’t have a touch screen. Windows Threshold users will still be able to download apps from Microsoft’s Windows Store, but those apps wouldn’t automatically take up the user’s entire screen as they do in Windows 8. 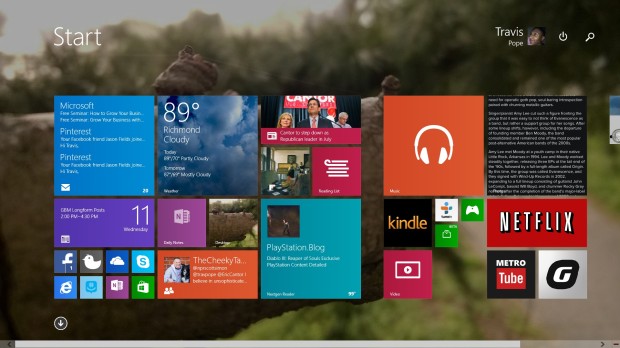 That Microsoft would make this change makes sense. Back in April the company announced that a future release of Windows would allow users to run Windows Store apps on the Desktop. What’s most interesting about these new rumors is that Microsoft at least appears to be heading back toward its roots on the laptop and desktop. Windows 7 is commonly thought to be the high-point of the Desktop environment or what people generally considered Windows until the début of Windows 8. It’s the desktop that allows users to install apps like iTunes.

It’ll only appear as if Microsoft is doubling down on Windows’s roots depending on the device users have. For tablet users things will be closer to what they are today, allegedly. Desktops & laptops with a touch screen and convertibles will still feature full screen applications as well as the Desktop. Windows will decide which one to surface users based on whether users have a keyboard connected or not. If a keyboard is connected than Windows Threshold will surface the Desktop environment and place all apps in windows. When there’s no keyboard everything will look and work as it does today in the Start Screen, according to this report.

Whether Windows tablet buyers will appreciate the changes coming in Windows Threshold remains unclear.For Windows 7 users, this couldn’t be better news. If these reports are right, the experience they can expect from Windows Threshold – or what’s being called Windows 9 by some – couldn’t be any closer to Windows 7. With the Start Screen miniaturized as a replacement for the Start Menu, users will be free to move windows around as they see fit. They could go directly to the more mouse friendly desktop environment to get things done.

According to ZDNet, a third version of Windows Threshold that runs on Windows Phones, Windows RT tablets like the Surface 2 and small tablets powered by Intel’s processors won’t include access to the Desktop at all.

That’s a very big change. Today, Surface 2 buyers have access to the Desktop so that they can move files, browse websites with a mouse and keyboard and work in Office 2013. Without that Microsoft will need to do something to fill in those feature gaps. Buyers of Intel-powered tablets have reasons to worry too. Unlike with the Surface 2, devices like the Dell Venue Pro can install desktop applications. Taking that away would nullify one of the key advantages of owning a Windows tablet.

We’ll have to wait for Microsoft to formally announce its plans for Windows Threshold. Today, the company hasn’t commented on much of its roadmap besides the small Windows 8.1 update users received earlier this year. ZDNet’s sources indicate that a public beta of Windows Threshold could happen sometime later this year, with a release in the spring of next year. Allegedly, Windows Threshold will be free to Windows 8 users and Windows 7 users alike, further underscoring Microsoft’s plan to get Windows 7 users on one of its newer operating systems by any means.