This isn’t a hidden Galaxy S6 feature that lets you swap in a spare Galaxy S6 battery. In fact Samsung warns that only a service provider or a repair agent should follow these steps.

Another interesting piece of information that comes with this process is that the back is removable, in some fashion. It is unlikely that you can snap the glass back of the Galaxy S6 off like you can with plastic on the Galaxy S6, but perhaps this will allow users who break the Galaxy S6 glass back to buy a replacement that they can adhere in place of the original.

Surprise! You can remove the Galaxy S6 battery.

If you remove the Galaxy S6 battery you will void your warranty, but here is how it is done. Please don’t try this at home.

With just six steps you can take the Galaxy S6 apart and remove the Galaxy S6 battery if it fails. You will likely need a hairdryer to loosen adhesive and you will definitely need a screwdriver and a lot of patience.

Take the SIM card tray out.

Step 1. Eject the SIM Card tray and set it aside.

Take the back cover off the Galaxy S6.

Step 2. Remove the Galaxy S6 back cover. The instructions only show arrows indicating that you should remove it. There is no pull tab visible in photos, so you will likely need to heat it up with a warming plate or a hairdryer until the adhesive is loos enough to remove the Gorilla Glass 4 back from your Galaxy S6.

Remove 13 screws from the Galaxy S6.

Step 3: Remove 13 screws from the Galaxy S6. The image above shows the location of these screws.

Take the circuit board out and set it aside.

Step 4. Lift up to remove the circuit board from your Galaxy S6. No one said this was an easy option to replace the Galaxy S6 battery. 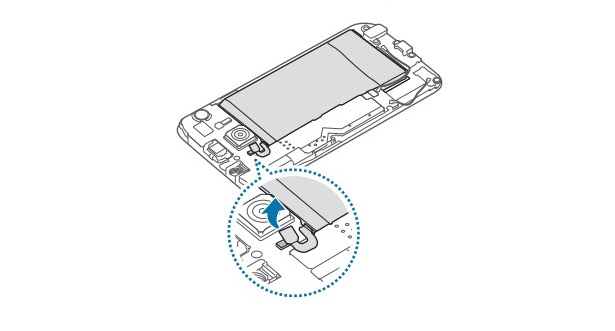 Step 5. Carefully disconnect the Galaxy S6 battery from the phone. The image above shows where the connection to the phone is made. Look near the camera.

Remove the Galaxy S6 battery and replace it with a new one.

Step 6. Lift up to remove the Galaxy S6 battery.

You should only perform this process if you know what you are doing or you need to replace a Galaxy S6 battery that failed outside of warranty. Any problems in the first year should be covered under warranty through Samsung. Samsung does not list any instructions to remove the Galaxy S6 Edge battery, so it may be more complicated.

The Galaxy S6 is the first Samsung smartphone n the Galaxy S line to use a sealed design that doesn’t let users replace the battery. This was a feature that Samsung made a major deal about when claiming the Galaxy smartphones were better than the iPhone in ads as recent as Fall 2014.

Reaction to the change from current Galaxy S owners was swift and angry in tweets and other social media where users complained about the change.

The Samsung Galaxy S6 does not include a Micro SD card, which is another issue and it is not water-resistant like the Galaxy S5. Samsung ads also highlight this water-resistant feature on prime-time TV.

The reason Samsung dropped these features is because the Galaxy S6 includes a new metal and glass design that delivers a more premium look and feel than older models. The new Galaxy S6 and Galaxy S6 Edge feature a 5.1-inch display with a Ultra HD resolution, come in 32Gb, 64GB and 128GB options and feature a new Samsung Exynos processor.

Count on a Galaxy S6 release date in April 2015 on major carriers like Verizon, AT&T, T-Mobile, Sprint and U.S. Cellular.