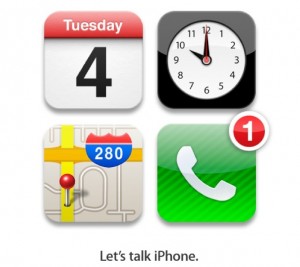 Apple is exercising its might and sucking all the oxygen out of the tech news in the run up to tomorrow’s announcement. Given how predictable that has become and how crazy the rumor mill is, I’m actually hoping that tomorrow might offer something different. In fact, I think tomorrow might be both a beginning and an end. Certainly it will mark the beginning of the Tim Cook era as the torch passes down from Steve Jobs. And yes, there will be iPhone news. Who really knows what that news will be, but it seems safe to say that there will some sort of new iPhone or iPhones for consumers to purchase soon. I doubt that Sprint will get an exclusive after betting the company which was the wildest rumor today, but I could be very, very wrong.

I’d also discount the rumors that devices might be available as soon as tomorrow (based on a rumor that Verizon told employees that they could rake in the overtime.) Don’t folks who follow this stuff know how this plays out? Announcement of the new iOS (we know that’s coming). It will be released soon. But first there will be an iTunes update. Then the iOS update. Then we’ll talk about when the phone(s) show up. But then rumor rampaging seems to be all the rage these days.

And speaking of that new iOS update, given that quite a bit of it is playing catch up (notifications, Voice Commands), some things need to be pretty revolutionary for it to really real news beyond Apple plays catch up.

What I think we’ll see tomorrow is the beginning of the wave of news from Apple that will quietly see “new device news” moving to the back burner. It will take awhile and yes, Apple will continue to come out with new hardware, but Apple is attempting to move on to a bigger play that will see it worry less about units sold than it will be about the number of folks who use its services and media. Most of that involves media and Apple has proven it can play on that field. Watch what happens with AirPlay in the future (beginning tomorrow) and you’ll get a sense of the long term strategy on the media front. Some folks in Redmond used to talk about three screens. I’m thinking Apple is about ready to show us.

Apple could still stumble and fall and the biggest risk involves the iCloud launch. It had better work out of the box (out of the sky?). If it doesn’t Apple will have an uphill battle on both the short and long term. Even if it has some hiccups, Apple will catch quite a bit of grief.

Most of the focus tomorrow will be on the device(s). But I think the news we’ll all be talking about in the future is what we’ll be able to do or not do with those devices.

By the way, I’ll be buying an iPhone 5. Assuming one is released.