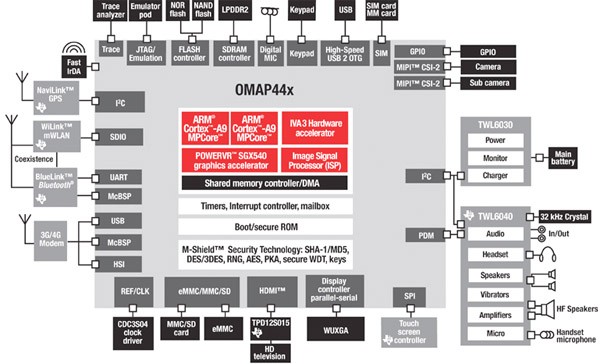 The Texas Instruments OMAP 4440 chipset is a dual-core 1.5 GHz mobile processor that is based on the ARM Cortex A9 reference design, which is also found on chips such as the Samsung Orion and dual-core Snapdragon among others. In the past, single-core TI OMAP processors have been used by Motorola on smartphones such as the Droid and offer competitive performance against Qualcomm’s single-core Hummingbird and Snapdragon CPUs. The dual-core 1.5 GHz chip will be clocked at a higher speed than NVIDIA’s dual-core gigahertz Tegra 2 chip, though the Tegra 2 is seemingly the first out of the gate and is rumored to be appearing in a number of tablets and smartphones for 2011, including those from Motorola and LG. As 2011 is shaping up to be the year that inaugurates multi-core mobile CPUs, TI is hoping to join the mobile smartphone arms race with an ARM reference design; with Intel the only contender in this race with its own Atom-based design.

The new OMAP 4430 is said to give mobile devices–phones and tablets–a 50 percent boost in performance. A slower 1 GHz dual-core clockspeed OMAP 4430 will also be made available, which will be similar to the NVIDIA Tegra 2.

With the new dual-core processors, Texas Instruments is also boasting a 1.25 times improvement in graphics performance, a 30 percent faster load time for webpages, and a 2 times increase in 1080p video playback performance.

Graphics will be delivered by a POWERVR 3D graphics engine:

POWERVR graphics solutions have been used in the past on Apple’s custom A4 processor, which uses a previous generation ARM-based reference design, as well as Motorola’s implementation of a TI OMAP solution on the Motorola Droid. The A4 chip is available on Apple’s iPad, iPod Touch, and iPhone.