With rumors of apps–including games–potentially making their way to Apple TV along with Siri compatibility and also speculations of an Apple-made iTV HDTV unit at an all time high, Tim Cook took to the stage at the All Things D D10 conference to fuel even more fire. According to Cook, Apple does not want to enter the home console gaming business that’s dominated by Nintendo, Microsoft, and Sony with their Wii, Xbox, and Playstation systems respectively. Cook did not deny the future of apps making their way to Apple TV in the future and said that Apple is a big player in the gaming market.

Cook says that the landscape for gaming has changed and that “more people play on portable devices.” He says that the company will watch the market to see “where we might go in the future.” 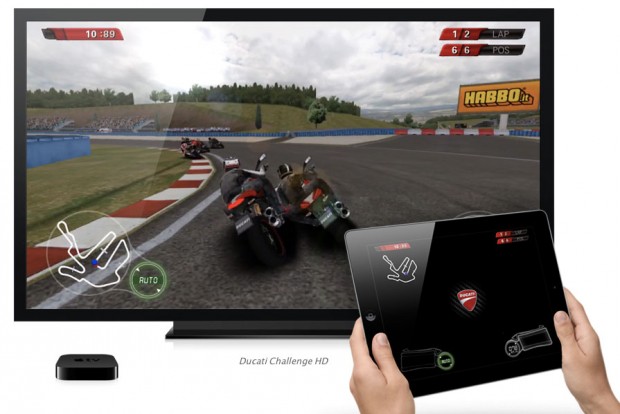 In the past, late Apple CEO Steve Jobs has always played up the gaming powers of iOS, noting that the iPod Touch is the most popular gaming device there is right now. The success of the iPhone and iPod Touch is largely credited to Apple’s huge catalog of apps in the App Store, which includes games, productivity, educational, and other titles. Though games and entertainment categories have been popular for iOS, many serious gamers have in the past criticized the experience of gaming on iOS due to the lack of hardware control and the casual nature of game play.

Apple has attempted to address some of those complaints. The company annually refreshes its hardware to include better processors, more advanced graphics support, and better displays. It has added social gaming to the mix and allowed developers to expand game play to add more levels through in-app purchases. However, iOS devices still lack hardware control, leaving an opportunity for Android licensee Sony–then Sony Ericsson–to swoop in with the Xperia Play.

“I’m not interested in being in the console business in what is thought of as traditional gaming,” says Cook. “But Apple is a big player today and things in the future will only make it bigger.” When asked if Apple would port apps to Apple TV and convert that unit to function as a home gaming console, Cook responded by saying that “it could be interesting.”

Right now, though, coupled with an Apple TV, and iPhone or iPad could leverage AirPlay capabilities to stream apps and game play to be mirrored on a larger display. Users can use their iPhone or iPad with the built-in accelerometer and touchscreen to control game play, but the apps themselves right now would still reside on the mobile devices, rather than on Apple TV.

And given that the world of gaming is evolving from discs and cartridges to digital downloads, from intense in-home play to multi-player online gaming, and from expansion and digital currency to buy additional tools for game play, Apple doesn’t really need a dedicated game console to compete in this market. It already has the largest and most robust app store with some quality gaming titles, a connected experience through WiFi, 3G, or 4G that will enable users to challenge each other through Game Center, and a capable in-app purchase system that will allow users to expand their game play. Coupled that with hot hardware like the iPhone, iPad, and iPod Touch, and Apple already has the attention of many consumers.