Apple is celebrating the 30th Anniversary of the Mac and has a part of that celebration there are interviews and special remembrances happening just about everywhere you turn. Yesterday ABC New ran an interview with Apple CEO Tim Cook to mark the occasion. In the interview, ABC Reporter David Muir talked about a number of things with the successor to Steve Jobs including Apple’s vaunted secrecy and also secrecy of another sort: How Apple feels about the NSA surveillance story that it and other big tech companies have been caught up in. 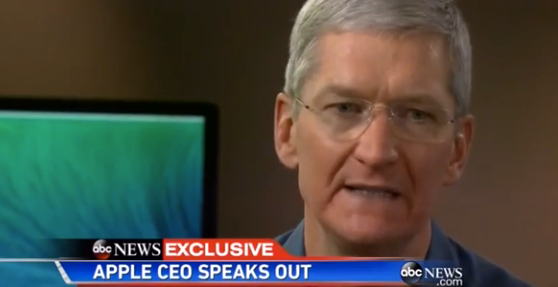 Apple’s secrecy is no secret, and Cook cloaks that in a jovial, “everybody likes a surprise” when it comes to the hush-hush nature about Apple’s future products. Not surprisingly Muir didn’t get Cook to part with any real clues about what Apple has coming next. But Apple’s secrecy hasn’t been as effective in the last several years has most of the features of the new products have been pretty well leaked prior to the big announcements detailing the what’s next.

On the NSA front, however, Cook said quite pointedly that Apple is under a gag order and can’t tell what it knows about the NSA surveillance. Saying much of what has been said isn’t true, he believes we’d all be a bit better off if there was more transparency and that “there is no back door. The government doesn’t have access to our servers. They would have to cart us out in box for that, and that will not happen.” Cook vows to continue to push Congress for a more transparent approach.

It’s fascinating how the secrecy issue cuts across multiple cloths here and leads to a tricky trust issue with the public.