Apple CEO Tim Cook will share a coffee date with the person to bid the highest in an auction, with all the proceeds going to a good cause.

The auction, which ends on May 14, is for the celebrity focused goodwill organization CharityBuzz. All proceeds from the auction will go to the Robert F. Kennedy Center for Justice and Human Rights.

According to the legal terms of the auction, the winner can be accompanied by the person of their choice and will have 30 minutes to an hour with Cook. At no time will the winner be able to take pictures, record the conversation, or post about it online. Not posting online, according to the legal terms includes, blogging, social networks, and talking to any press outlets about the experience. The winner will be asked sign a non-disclosure agreement upon arriving at Apple. 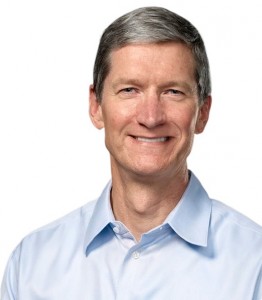 Expect Tim Cook to announce the iPhone 5 in September.

Tim Cook was recruited by Steve Jobs in 1998. At that time his job was to streamline the company’s manufacturing and supplies process to increase margins and help bring Apple back to profitability. Eleven years later, Cook was promoted to Chief Operations Officer and served two brief stints as Chief Executive Officer while then Apple CEO Steve Jobs was being treated for health issues. When Jobs was forced to resign in August of 2011, the CEO position went to Cook.

Since taking over the top job at Apple, Tim Cook has repeatedly sought to make the company his own by incorporating the ideas of Apple being a better world citizen into its DNA. When Apple came under increased scrutiny for the way workers manufacturing its iPhone and iPad lines, Tim Cook himself personally took a trip to the factories in question to inspect the work that was being done in Apple’s name – something that his predecessor never did.

According to The Verge, at a Town Hall meeting in 2012, Tim Cook said that Apple had donated a total of $50 million split between an area children’s hospital and Stanford University’s main hospital. It’s believed that under Steve Jobs, Apple’s policy was to maximize shareholder value, and then let those shareholders give what they’d like to charitable causes.