Had a great Thanksgiving yesterday. Good food, good company. Good music too thanks to Pandora streaming from my iPhone via Bluetooth to an Anycom FIPO adapter connected to a Bose stereo. Makes me wonder we’ll get Bluetooth standard on more stereos.

Streaming audio over Bluetooth isn’t a feature new to the iPhone or other devices, but it’s gotten a lot of buzz lately due to the new AirPlay feature in iOS 4.2. Connect an Apple TV to your TV and you can stream video to it from your iDevice. Works with audio too, except audio can also be streamed to Bluetooth-compatible devices. Before the AirPlay update, selecting which one to stream to was a chore, requiring me to go into Settings to select the right target. AirPlay makes things easier, but again though, this isn’t new. 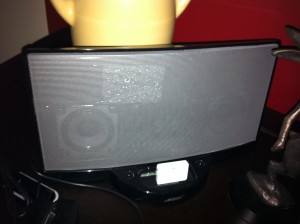 Back in March, I put together a Bluetooth streaming solution for my car using a cassette adapter, USB power via the lighter, and an Anycom FIPO. I was impressed enough with the FIPO that I picked up a couple more for my home, upstairs and main floor. I typically kept them unplugged when not in use, but the ease of selection via AirPlay lets me leave them in and switch as I please. That and the ability to change stations and adjust volume from my handheld allowed me to control the music without touching the stereos. 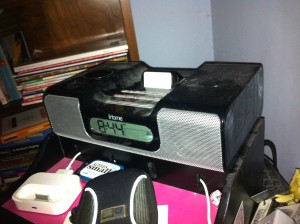 So I have to ask: will AirPlay help get Bluetooth on more stereos? Apple has their own initiative to for AirPlay certification, but that doesn’t help folks who aren’t using iDevices or who would prefer an open standard. Instead of automatically jumping on board with AirPlay, I hope stereo makers will consider Bluetooth as an alternative or at least a supplement.