Those who use the Time Warner cable app on a jailbroken iPad may have been greeted with a stern message after installing the latest update. As Eric Slivka at MacRumors points out, the following message would be displayed for those users:

Though it’s likely that a relatively small percentage of iOS users stream content from the Time Warner app, this precedent could potentially be cause for concern. As it stands now, jailbreaking is a choice. If you want the extra customization, you can have it. All of the core iOS features are still there, but you also have new options on top of that. But if things start getting taken away after jailbreaking – like access to some of your favorite apps – that could be a big reason to sway iUsers from jailbreaking.

What is almost puzzling is that it took this long for this kind of measure to arise. Skype’s app has issued a warning that “Skype is only supported on unmodified devices…” for some time now. However, the pop-up only came up once and didn’t affect the app’s functionality in any way. The Time Warner app, on the other hand, is completely disabled to jailbreakers. Perhaps other companies realized that it was a) unnecessary, and b) potentially harmful to their own interests.

While we could see a future where developers (or Apple) tweak more and more of their apps to lock out jailbreakers, it wouldn’t be a smart move. Most apps face stiff competition, and with so many iPhone users having jailbroken their phones, this would only give them reason to turn to a competitor. If it happened on a large scale, it may give more users reason to switch to Android.

Speaking of Android, we have seen similar incidents come up with rooted users being blocked from certain apps. The most obvious incident came from Blockbuster – another company that is stuck in the 20th century. 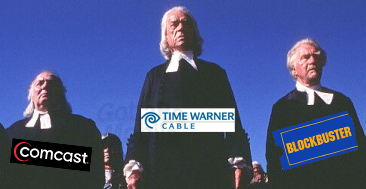 The irony with this is that, as a subscriber-based streaming video app, Time Warner probably had nothing to worry about. Tweaks can be made to run apps on devices they couldn’t previously run on, but we have never seen a case of the iOS jailbreak community (or the Android rooting community) allowing users to download streamed content or to let non-subscribers access a subscription-based app . It would be highly illegal, and it just doesn’t happen.

This serves to illustrate the paranoia that companies who are stuck in a previous century’s mentality experience when faced with change. Cable companies have gone to great lengths to resist the inevitable shift to digital distribution. They are showing the same pig-headed ignorance here. Nobody downloads streamed content from Netflix, and nobody was going to do that to Time Warner. This is the case of a bunch of old suits making generalizations about “those no-good hackers” and taking ridiculous measures to “protect” their content (which never needed any protection).

Though we have a feeling that this won’t end up hurting anyone but Time Warner. After all, jailbreakers have already found a way around it.