Today, in an effort to attract subscribers Ting announced a campaign to reimburse the early termination fees of new subscribers to its network next month.

The Ting campaign will begin on February 1 for anyone who activates a new line on Ting during the month of February.

To get the reimbursement users have to port their number over to a new line on Ting, which will cancel the plan the number is currently tied to. Users then send a scan of their bill with the early termination fee to Ting, which will credit new subscribers up to $350 for each line they bring to the carrier. 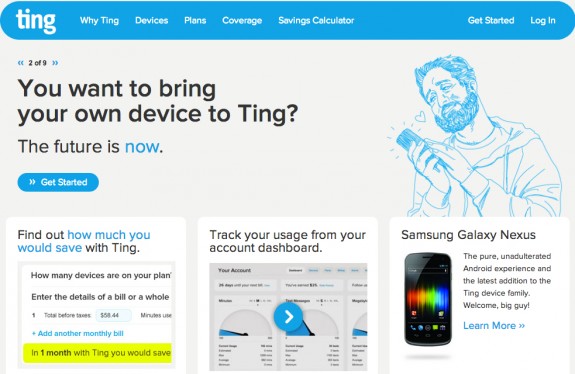 Users will still have to pay the ETF to their current carrier, but they won’t have to pay it on top of the Ting service. The Ting payment is in the form of Ting credit, not cash.

Ting lets users choose their own plans based on how many voice calls and texts they make as well as how much data they use. The carrier only makes users pay for what they use, and if they use more than they anticipated the carrier bumps them up to the next tier of usage with no additional fees. Because of this, $350 credit for the carrier can a few months, depending on usage.

Users may have to pay more than $350 in ETFs depending on how recently they purchased their phones. The more recently someone purchased a phone, the more they have to pay in early termination fees. For some users, however, the ETF is worth it to get out of a contract and onto a prepaid plan.

Ting uses Sprint’s network to operate its network, and has a wide range of Android smartphones and features phones. The carrier doesn’t offer the iPhone nor Windows Phones, but it does offer high-end Android phones like the HTC EVO 4G LTE, Samsung Galaxy S3 and Samsung Galaxy Note 2.