While most communicators doing presentations with a tablet will likely go with an iPad, some of us prefer the Android platform and want to do all that iPad users can do. It’s not as easy to conveniently do good presentations on Android tablets as it is on an iPad, but with some effort, a great app, and a few accessories, communicators can get their message across with skill and professionalism.

See how simple it is to connect a Samsung tablet to a display using Screen Mirroring:

An Android presenter will need a few things in addition to a good tablet. First, find a good app to create and edit presentations on a tablet. Second, a good way to display the content so others can learn from the presentation. I’ll also talk about connecting the tablet and display. Finally, get some tips for making good presentations.

Hardware Needed to Display a Presentation

To get started, presenters need to get a large HDTV or a video projector. People who don’t own either should get at least a 50-inch HDTV or a modern projector with HDMI inputs. A TV will work in a small medium-sized room. Use a bright projector in larger rooms. 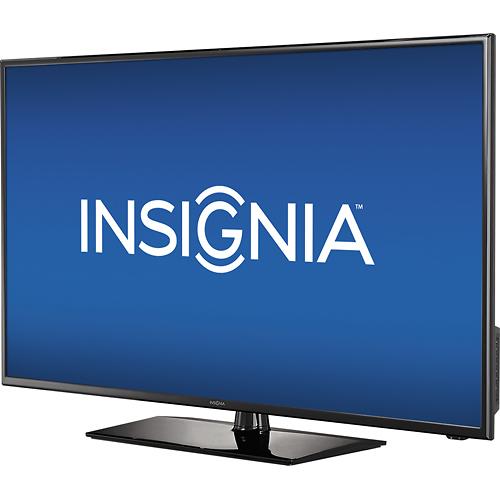 This cheap Insignia 50-inch HDTV from Best Buy does a great job of mirroring an Android tablet display.

Ambient lighting affects the choice as well. Bright rooms will wash out the display of most inexpensive projectors, so opt for a large HDTV or a projector with a high lumens count of at least 3000 for medium light, or 5000 for very bright rooms. Lumens refers to how bright the projector display images. The larger the number, the brighter the projector, normally. Some manufacturers are dishonest, pumping this number higher than their products actually output, so also look at the contrast on the projector. Higher contrast shows off images and text better and doesn’t require as bright a projector. If possible, try the projector out, or get one from a place that lets you return it if it’s not bright or sharp enough.

The ASUS Pocket Projector is extremely portable, but not bright enough for bright rooms.

In a dark room a presenter can use a cheap $500 projector. It’s more portable than a TV, but good enough to show off the images in the presentation. Some “pico projectors” will even work in very dark situations, like the above ASUS Pocket Projector ($399.99). These miniature projectors make for extremely portable solutions, but they usually don’t provide enough brightness for most rooms. They only work in a very dark room.

To choose the right sized display, head over to the Projector Central’s display size calculator to learn the proper size screen for a specific size room, or grab a little $.99 app called HDTV Calculator that does the same thing, but on an Android device. 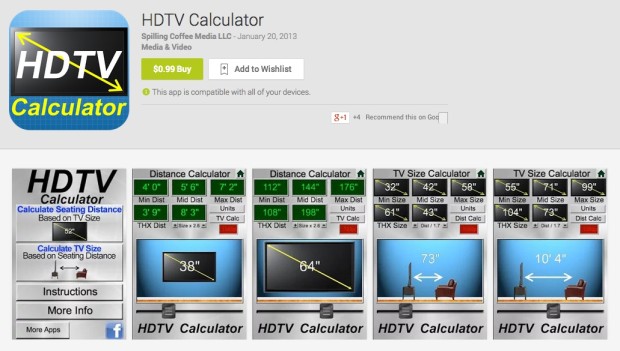 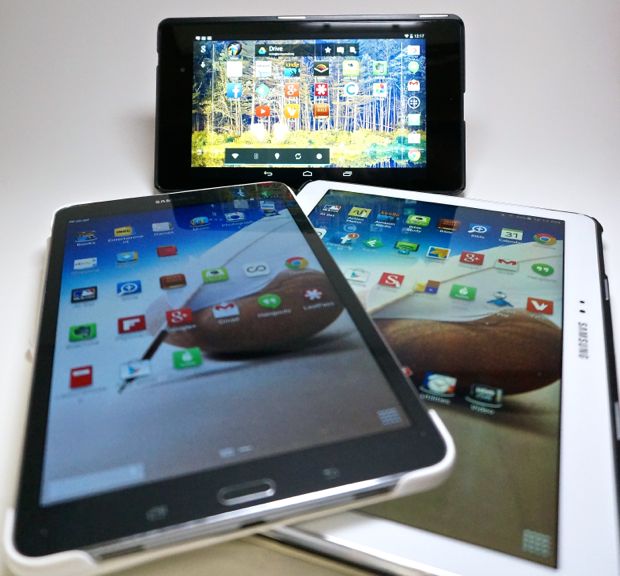 Here’s our list of the best Android tablets available today: 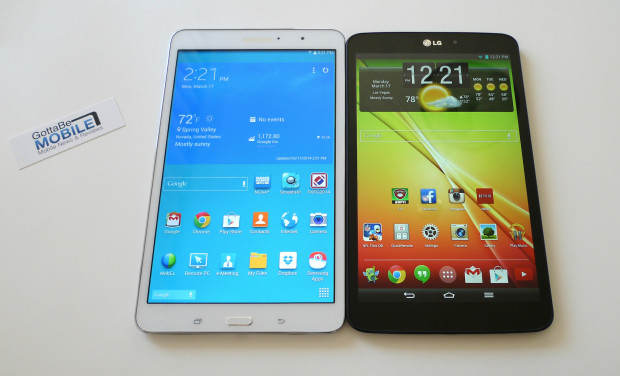 All of the above tablets will do a great job. We picked them for a few reasons:

The size of the screen matters, so go with a 7 or 8 inch tablet, like the Nexus 7, the LG G Pad 8.3 or the Samsung Galaxy Tab Pro 8.4 for more portability. People with poor eyesight will need a larger 10-inch screen. like the Samsung Galaxy Note 10.1 2014 Edition or the ASUS Tablet TF701T-B1. Some presentation apps will let the user display the current slide, the next slide and some presenter’s notes on the tablet while the external display only shows the active slide. If a presenter picks an app like that, they should also choose a larger screen. If the app only mirrors the display, meaning it shows the same thing on the tablet and the external display, then a smaller tablet will do fine for people with good eyesight.

Making the Connection Between Tablet and Display

Connecting the tablet to the display using a cable simplifies the hookup process. This only works if the person making the presentation stands or sits close to the TV or projector. If that’s not possible, the presenter can find a long cable. 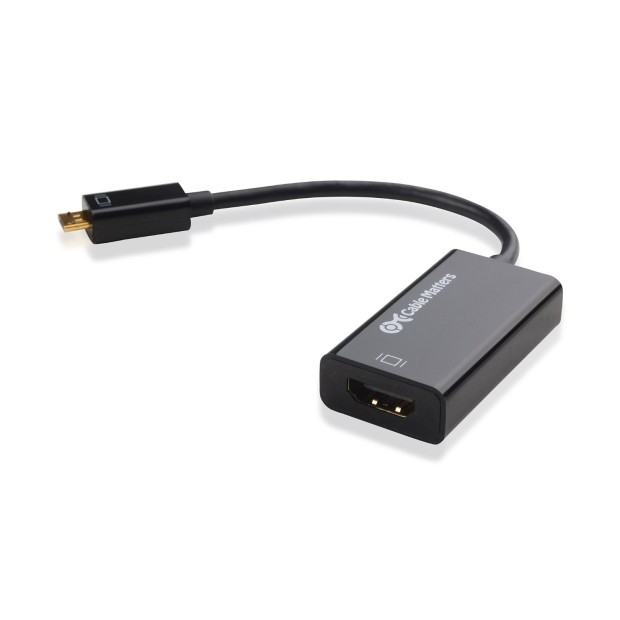 Nexus 7 and LG G Pad 8.3 users will need one of these Slim-port adapters because regular MHL to HDMI adapters don’t work.

To make this connection the user needs an adapter that plugs into the micro-USB port on the tablet. The Nexus 7 and the LG G Pad 8.3 both require what’s called a Slim-port adapter, like one we found on Amazon for $16 (see above). This doesn’t work with the older Nexus 7 2012 model. 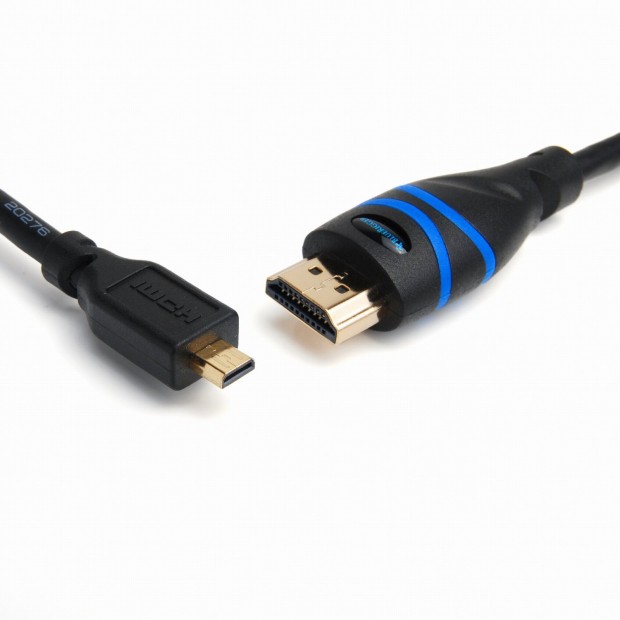 Get a cheap micro-HDMI to HDMI cable for the ASUS tablet like this Bluerigger cable.

The ASUS comes with a micro-HDMI out port, so just find a cheap cable with that on one end and regular HDMI on the other, like the one above that costs less than $10.

Both Samsung tablets require a different kind of adapter from the Slim-port Adapter or the micro-HDMI to HDMI cable. Do a search for MHL to HDMI adapter to find a cable that connects the micro-USB to the projector or TV. Amazon sells one for $13.

Whichever cable or adapter you get, plug it into the micro-USB port on the tablet. For the adapters, plug a regular HDMI cable into the adapter and the other end into the display. In the case of the ASUS use one cable to go directly from the tablet to the display.

Some older TVs or projectors don’t include HDMI. I’d get a new one or look for an adapter that will connect an HDMI to whatever ports the display offers. 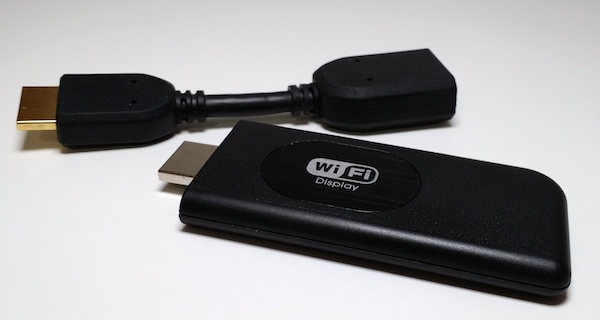 The Tronsmart T1000 hooks up to an HDMI port and connects to Wi-Fi to let users display their tablet on the screen wirelessly.

A more convenient, but also more complicated, way of making the connection uses wireless to connect to the display. A solution called Miracast does a nice job. Some displays come with Miracast support built-in. If the display doesn’t, then use an inexpensive adapter like the Tronsmart T1000 HDMI wireless adapter (see above) that supports Miracast. I’ve tested it with a Kindle Fire HDX 7, Google Nexus 7 and both of the Samsung tablets in our list above. It should also work with the ASUS and the LG. With it, users can mirror their screen to the display wirelessly and show a presentation using a presentation app. It works with many smartphones too.

Here’s a video demo from the company about using the Tronsmart T1000.

Using the Samsung tablet, open Screen Mirroring by swiping down from the top of the screen. Tap and hold on Screen Mirroring from the row of Settings icons that appear at the top of the notification area. This opens the Connections tab inside Settings. Turn Screen Mirroring on by tapping the on/off switch in the upper right corner. Tap on Scan above the switch and let it look for devices, and when the Tronsmart appears tap on it to connect. See below for an example on a Samsung Galaxy Note 10.1 2014 Edition. 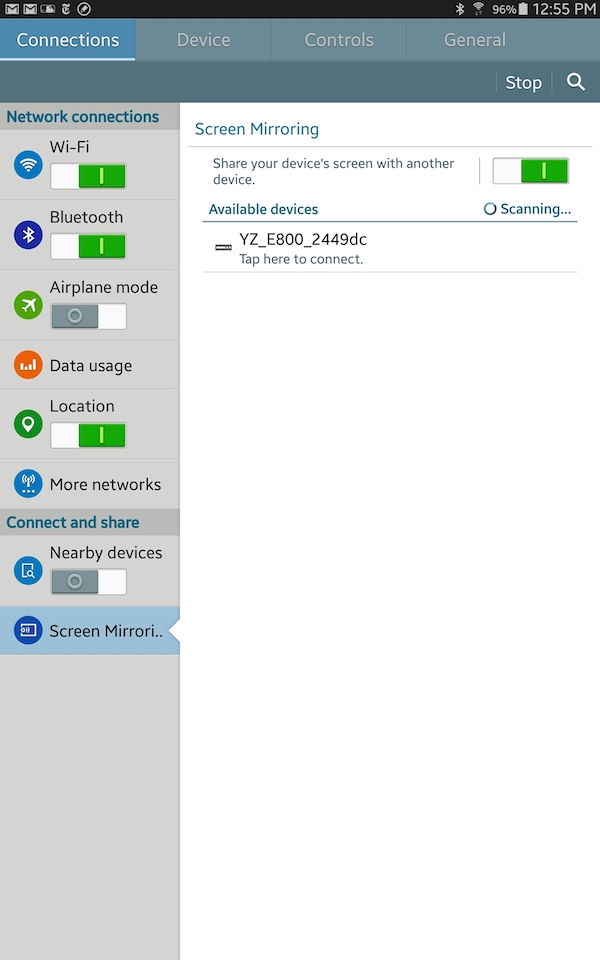 To set up wireless mirroring over the Tronsmart T1000, open Settings and tap the Connections tab. Screen mirroring is at the bottom on the left.

The Google Chromecast, which also connects to an HDMI port and uses a Wi-Fi network to stream content from tablets and smartphones to a TV, doesn’t support Screen Mirroring. That’s why the Tronsmart T1000 does presentations better than a Chromecast.

People who already own a Chromecast can use still it, although not as elegantly. Instead of running a powerful presentation app, create slides in a graphics editing app or program. Find pictures and put text on them as needed. Save the images in order starting the names with double digit numbers like 01 and 02 and so on. Save them to the phone or in a folder that syncs with a service like DropBox. Display them using an app that will cast images to the Chromecast. Users could also create the presentation using a PDF maker and then cast the PDF file to the Chromecast. More on that below.

Microsoft just released their Microsoft Office Mobile for Android, but it requires an Office 365 subscription if a user wants to edit files on their mobile device. It also doesn’t run on any of the tablets I tested it with. So, look to another solution. 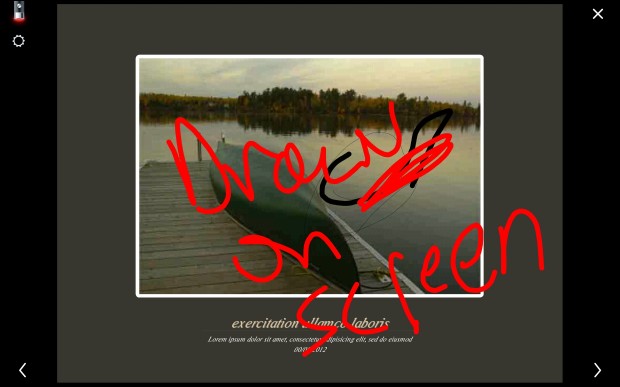 Polaris Office 5 comes pre-installed on lots of tablets and offers some nice features like onscreen notes and a pointing too.

Lots of tablet makers bundle Polaris Office with their devices or get it free on Google Play. Create presentations on a mobile device and import or export them using Google Drive, SugarSync, DropBox or Box. This makes it easy to get a file off a computer and onto the tablet. It includes the following advanced presentation features:

These apps all include sharing features which let the presenter share the presentation file with their audience. Email it to the person or upload it to DropBox and create a public share link. Do it before the presentation and put the link on the last slide. Google Driver uses can share files too.

AllCast is an  app for Chromecast users (see video demo above from the maker). There’s a free version and a premium version that costs $5. It won’t display presentation files from PowerPoint or Google Drive, but it will show images and PDF files. Create the presentation by making image files on a computer or an app. Then save them in the order as discussed above using double digit numbers. Users can also create a PDF document formatting the pages to fit their display’s resolution. Then use AllCast to display the PDF file.

I posted tips on making good presentations a while back. The keys to a great presentation include: 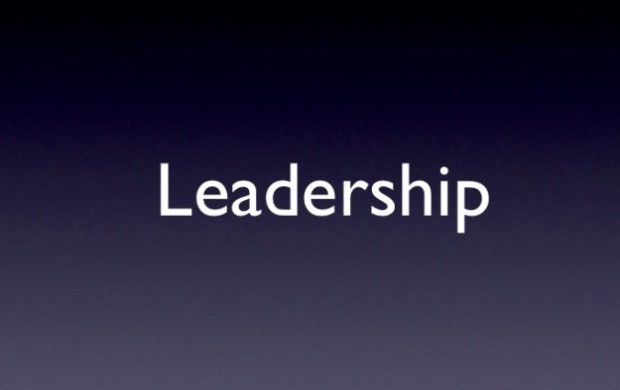