New Titanfall Gameplay video footage shows what it is like to play one of the most anticipated games of 2014 as Respawn looks to change what gamers expect from a shooter on the Xbox One, Xbox 360 and PC.

One of the lucky gamers that played the Titanfall Alpha that closed last night sent footage of the Titanfall multiplayer to Gotta Be Mobile which we share below so you can get an idea of what it is like to play on foot and in a Titan in this next generation shooter. 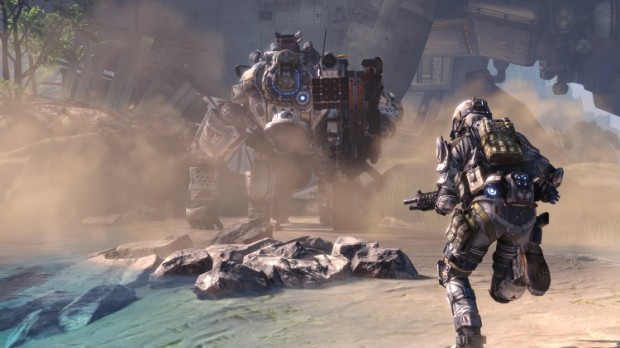 Watch the alpha footage to see the Titanfall Gameplay experience in video.

The Titanfall Alpha is a stress test for the games servers to help make sure gamers don’t experience the letdown of a broken multiplayer experience like Rockstar delivered with the GTA Online gaming experience.

The five-minute Titanfall gameplay footage shows the multiplayer gaming experience in the closed alpha. This leaked footage shows gamers fighting on foot similar to other first person shooters as well as in Titans, which offer Mech like abilities for gamers to play in the Titan or to order the Titan to follow them or guard them.

Titanfall looks fun with a diverse modes of play in this one map, limited engagement look at the game. According to Rayme Vinson, the graphics shown in this server stress test are 25% of the resolution of the final game, so the real game will use textures that are 4x bigger, so this isn’t a video to judge the graphical abilities of Titanfall.

The Titanfall closed alpha is now complete as the developer was able to capture enough data about the online gameplay with real world users, but there may still be a chance for gamers to play Titanfall before the official release. Abbie Heppe a community manager for Respawn Entertainment told a curious gamer that a Titanfall beta is, “possible,” in a reply on Twitter on January 18th. There are no further details from developer or community manager about how to sing up for a Titanfall beta, when it might launch and what countries would be included.

The Titanfall release date is set for March 11th as an Xbox One and Xbox 360 console exclusive. It will also work on the PC. The game releases in Europe days later. Titanfall is one of the first major console exclusives to arrive in 2014, and will beat Destiny to release by almost six months.