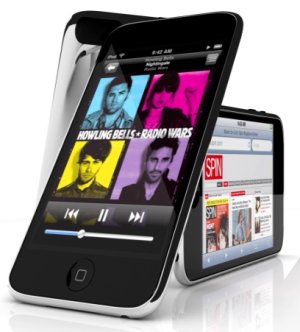 Well, there were certainly no shortages of surprises at today’s Apple event. Pretty much everyone’s predictions were off in some way, particularly the one about cameras in the iPod touch (I scored about 0.5 out of 3). The touch got a storage bump on the high end and a price drop on the low end, leaving a hole where the 16GB model was (and shaking up the competitive environment with a different set of variables). They did get the expected processor bump, but the big emphasis was on gaming, even going so far as to compare their game library directly against those of the Sony PSP and Nintendo DS.

I would guess they are still intent on keeping the touch from competing too strongly against the iPhone, but with the camera addition to the nano, the touch now floats in a weird zone between the two. It doesn’t offer the connectivity or other hardware features of the iPhone. It offers superior software and gaming compared to the nano, but lacks all the fun new nano features, like photo, video and audio recording. If a user wanted to upgrade from a nano, I can’t say the touch would be an adequate choice. I would guess the goal all along was to make both the nano and touch separate stepping stones to the iPhone.

Still, while the event sucked for me as a computing enthusiast, I must admit it did shake up the consumer electronics market. Pocket video cameras are now competing against the iPod. Apple renewed their commitment to handheld gaming and demonstrated with raw numbers that their digital distribution model for games beats physical media, which should have every content distributor taking notice.

Oh, and no tablet, which means more months of speculation. That’s just prime.