Shutting the barn door after the horse has left the barn might be the best way to describe this. Maybe not. Regardless, you can certainly say that this move by RIM doesn’t exactly jive with that metaphor about no wine being released before its time. In fact you can say that RIM isn’t that good at anything to do with timing and release dates of late. 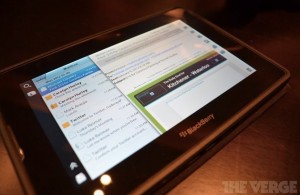 Regardless, RIM finally announced version 2.0 of its Playbook OS. Guess what? It comes with native email, calendar, and contact apps. Of course those are Apps that RIM took some shots for not having ready with the Playbook’s big launch last year, especially given the bones RIM had made with that kind of App functionality on its Blackberry phones. Talk about a miscalculation. RIM was criticized then, and is destined to be dinged up again now that they are finally releasing that functionality.

I’m picking this info up from The Verge who says that v2.0 is the most polished version yet with some home screen enhancements, drag and drop icon placement and folders. In addition the Messages App doesn’t just do email it also integrates LinkedIn and Twitter to some degree. For Twitter you can send and receive direct messages in the Messages App, but you need a Twitter App to just send a Tweet.

I may be wrong here but I don’t think any of the GBM Team has a Playbook, and even if they did, with priorities being at CES 2012 at the moment I doubt we’ll see any immediate testing here of the new OS. So, head over to the Verge to see what’s what for the moment.