The Fitbit Force is the latest wearable fitness gadget to debut over the holiday shopping season competing in the same space as the Nike+ Fuelband and the Jawbone Up. However, the Fitness Force may be just that–too forceful–resulting in injuries to the wearer, but not in the way you would imagine.

According to a report on the Consumerist, it looks like one reader, Kevin, noticed that he had a red blotch on his skin on his wrist under the device that grew over time to a rash. Kevin noted that he switched the device to the other wrist and that a similar rash occurred. A nurse practitioner later diagnosed the condition as contact dermatitis. 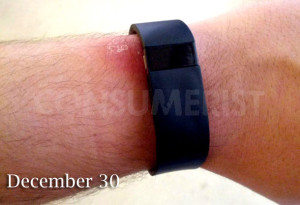 “When the spot eventually blistered and scabbed over, it became infected,” the Consumerist reported. “He believes that he may be left with a permanent scar.”

The publication showed additional photos of Kevin’s blister if you wanted to view those images.

Kevin isn’t the only person with this issue and Fitbit’s forum shows that multiple users are suffering from this allergic reaction to wearing the device.

“We are aware that some of our customers have reported a skin irritation from wearing their Force device,” Fitbit said in a prepared statement. “We conduct testing in order to satisfy a variety of internationally accepted standards relating to the safety of the materials in our devices.”

According to the company, the device is made from surgical grade stainless steel and an elastomer wristband that does not contain latex. Both these materials are used in jewelry and watches, both of which are in constant contact with the skin.

Kevin says that his rash developed in the area under the device where the charging port and the battery are located.

“As with any jewelry or watch, numerous factors could cause a skin irritation, such as nickel sensitivity (surgical stainless steel is an alloy containing traces of nickel), reactions to bacteria that can accumulate in wristbands, or a sensitivity to the material of the band elastomer,” Fitbit said.

In response to its customers, anyone with an allergy could contact Fitbit for a refund or a replacement tracker in the Fitbit family. Fitbit will cover all shipping costs and provide a refund on the difference in price.

This is an interesting situation considering that wearable gadgets took center stage at the Consumer Electronics Show this year and new or improved devices made their debut at the show earlier this month. Though the problem appears unique to Fitbit at this time, similar allergic reactions could develop with other wrist-worn devices including smartwatches and other fitness tech.