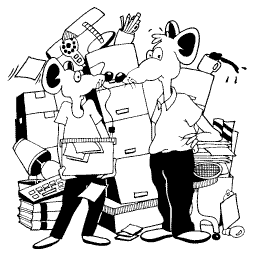 Nothing lasts forever. Including things we wish would indeed last forever. Accidents happen, things get misplaced. Technology fails. But in the digital age there are ways to give yourself some piece of mind when it comes to storing content that contains memories and things you’d like to hang on to.

I’ve always been a pack rat. I read things, view things, listen to things, and hang on to that which I find curious and worth keeping. Somewhere in storage I have boxes of notes on legal pads from shows I’ve directed, as well as newspaper and magazine articles that I clipped along the way. When the web came around I had a gazillion bookmarks of things I found interesting, as well as boxes of paper from articles that I found worth saving and printed out. There was a time when I was the best friend of the printer ink business. When Tablet PCs came along I was able to keep my theatre notes in digital files and I thought that was a revolution. At least for me. Actually it was the beginning of a change in my pack rat habits.

I also hoard books, full magazines and periodicals, and used to have a vinyl record collection that took a small army to move. Photos? Yep. Tons of them in boxes, never organized. In fact, I’ve changed the containers for those photos over the years more than I’ve ever looked at most of them. But I still hoard.

That mini-revolution that is the digital age has changed quite a bit of that. Sure I still have the books, photos, newspaper clippings, and some of the other things stored away physically. But I’ve cut back on that as I do my hunting and gathering through digital sources.

I use a variety of tools in my digital pack ratting and this is a rundown of what is working for me now as well as some tools of days gone by. I’ve broken it down into categories.

I do a lot of research as I’m working on plays, grant writing, and other things. I like to save things and go back to them when I need them. I was a big del.icio.us fan for a long time as it was a quick and easy way to bookmark something for later use. I also used print quite a bit of material into OneNote. While I still use OneNote for that, my habits have shifted quite a bit as I mostly use Apple products these days.

I actually have a three step system at the moment for saving research. It is sort of a prioritization scheme. But there’s another reason for the redundancy. The three tools I’m using the most are Evernote, Instapaper, and Read It Later. If something is a high priority it gets clipped or saved to all three. If an article or bit of info is something I plan on using in the immediate future it will go to just Read It Later and Evernote. If the material is long form and something that I will get to at my leisure it will only go to Instapaper and occasionally Evernote.

That redundancy I mentioned speaks to my pack rat gene. The three services I mentioned all store what I save in their respective clouds. Those clouds may be stable and operating these days, but just like with any business there’s no guarantee that they will be their forever. In fact there’s no guarantee that anything stored digitally or physically will last forever no matter how many steps you take to persevere them. But having info I deem important stored across three clouds gives me some piece of mind.

Whether it be reviews, or articles I want to keep for whatever reason I use the same tools I mentioned above. I have boxes of old reviews of plays that I’ve done over the years. I also have tons of articles saved digitally in OneNote, Evernote, Instapaper, and Read It Later. Keep in mind as you store things from the web, that occasionally links and bookmarks change just like old newspapers fade in time. You might think you have that link preserved, but at some point when you need it, well, the link doesn’t work anymore. This is why I like to use Evernote and OneNote because they allow me to save articles in a PDF or a printed format. Using Evernote in Safari (about the only think I use Safari for on the Mac platform) is the easiest and best looking way to do this. By holding down the Shift key when I go to clip something I get the web page or document in the exact way it appears on my screen. I’m sure Evernote users have clipped web pages before and seen the lovely three column effect where you get the left column, followed on the page with the body of the article, followed by the right column. I find that annoying.

I also use Printopia to print articles directly into Evernote. That works reasonably well for this kind of archiving, but it is also subject to the three column effect.

Again, with redundancy as an priority here (you never know when a service will be sold or change its ways), I store photos on Flickr, Facebook, Picassa, and also locally on hard drives. More on that option later in the post.

When my mother passed away just over a year ago, I became the family custodian of the collection of pictures she had saved over the years. I have boxes (now protected) of these photos. But as I was exploring through them (many my sisters and I had never seen) I found one collection of photos that had gotten destroyed by moisture of some sort. Those photos are gone forever, but the rest are preserved. Redundancy is possible in the digital pack rat age and I recommend we take advantage of that fact when it comes to our photographic memories. Having my photos duplicated across multiple services gives me a sense of redundant comfort.

At the moment I’m largely tied into Apple’s iTunes ecosystem, although I use Amazon’s MP3 service to buy most of my music. I also have a range of music and sound effects from past shows that I keep archived in addition to purchased or ripped music. I’m anxious to see how iTunes Match works since that won’t require massive amounts of uploading to the iTunes servers in the way that Amazon and Google’s music services do. I also keep my music library backed up locally as well. We’re about to go through some evolution in the next few years as Apple, Amazon, and Google compete for our music collection storage. That’s a good thing as it might allow for a redundancy option. But I also keep my music backed up locally in addition to any Cloud service I may contemplate using.

My wife and I have a constant running battle about my DVD collection that rivals anything I ever had with vinyl music. She’d love for me to get rid of it, but I don’t see that happening. While I’ve been moving more towards streaming or purchasing video content digitally (see I can compromise), I don’t see myself ever taking the time to rip the physical disks I have over to digital format. That said, I do have quite a bit of digital video that I keep stored on local hard drives. And that leads to this:

Pack Rat in the Cloud? Or on the desk? Or both?

Yes, I have a lot of stuff archived in the Cloud. But I also have most of it backed up locally on hard disks. If it is important to me, I’ll actually have it on two hard disks. Am I paranoid? Probably. But just like I don’t trust Cloud services to be available forever, I also don’t trust physical media to last forever. Once a year or so, I’ll go through the process of purchasing new portable hard drives for use with my machines. I’ll copy over the archived stuff for use on the new machine to the newer equipment. The older drive will get unplugged and stored in a secure location in case I need it. The device it is replacing will then come back to my house or office as a back up to the back up. This rotation gives me some piece of mind that I always have copies of the content I think is worth keeping available in three locations, plus on whatever Cloud service I’m using at the moment.

So, what about you? If you are a digital pack rat what are your strategies for saving and archiving your content in the digital age? There are obviously other methods, Apps, and strategies beyond those I use. We’d love to hear about any you use.