ToonYou.com, and a guy named Rod!

Seems we are on an art theme tonight at GottaBeMobile! 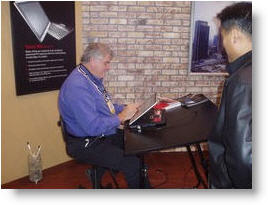 I know a guy named Rod Beasly, who is doing a pretty cool thing with a Tablet PC!  I first met Rod at CES in Las Vegas this past January.  Rob Bushway and I were on a quest at CES to see the first rumored public showing of the new Toshiba M400 Tablet PC.  We searched high and low, and finally found it at of all places, the Toshiba booth (long story — don’t ask)!

Well, surprisingly enough, the crowd was not around the M400, it was around a guy sitting in a chair drawing caricatures with a Tablet PC.  Toshiba had hired Rod to do free caricatures of anyone willing to brave the line to get one done, and I must say, it was incredible watching him do so. So…, Rob and I managed to slip in and pose for one!  It was lots of fun. If you have never had one of these done, it is a highly entertaining experience. 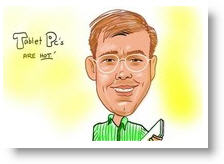 Well, we have kept in touch with Rod a bit, and he has now launched his own web site at ToonYou.com with the help of Jesse Kelly of Creative Arts.com .  Here are Rod’s cartoon depictions of a couple of special folks here at GottaBemobile.

So how can you get your very own Rod Beasly caricature?  Simply surf on over to ToonYou.com, send him a digital .jpg file, and place your order!  The prices are very reasonable, ranging from $9 to $14, depending on the number of subjects and color options. 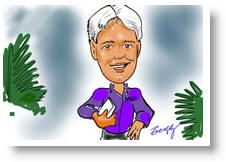 This is a great image to have, I have used mine here on GottaBeMobile.com as well as my IM avatar, etc.  I’m gonna pick up a couple for family members as well.  Very cool gifts, and not one you will likely hear, “Oh, I already have one of those”.  There are a number of examples on the site as well.  He can depict you in most any way you request, so have some fun with it!

Rod also does events just like he was doing for Toshiba at CES, so if you or your company wants to ante up for that, give Rod a yell!