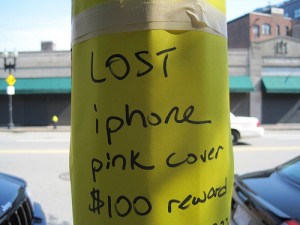 Losing an iPhone is Common

As our smartphones and tablets get smaller, and we start to carry more devices, it becomes easier and easier to lose them. According to several recent surveys lost smartphones are a common problem. From airports to swimming pools and New York to California, we all have trouble hanging on to our gadgets when we travel.

For a closer look at where we lose our smartphones, tablets and gadgets; we tracked down an infographic that shows the Top 10 Cities for Cell Phone Loss or Theft, Top 10 Places We Lose Our Smartphones and just how many laptops, tablets, smartphones and USB drives we lost in major airports last year.

CREDANT looked into how many gadgets we lose at airports and found that in 2010 we lost over 11,000 laptops, smartphones, tablets and USB drives while traveling through the busiest airports in the U.S. While you would expect USB drives to top this list of lost electronics, it was actually the least lost gadget.

Most commonly lost gadgets at airports in 2010:

Most of these items were lost at security checkpoints, but CREDANT found that travelers also lose their gadgets at food courts, restrooms, baggage claims and other areas quite frequently. With more than one device along for the trip, it’s easier than ever to lose a smartphone or laptop while traveling.

Lookout Mobile Security also took a look at where we lose our smartphones, and why it is such a big problem. combing through a collection of sources Lookout found that the following cities have the highest rate of cell phone loss and theft.

Top 10 U.S. Cities for Phone Theft and Loss (by % of population)

Lookout confirms that the Airport and Airport Security are popular places to lose your cell phone, alongside restaurants, purses, the subway and several other easy to imagine locations.

How to track your smartphone, laptop or tablet

When you lose a smartphone, tablet or laptop you are out more than your device. You also lose your data and contacts, both of which are difficult or impossible to replace. You should install a free tool like Prey on your laptop or go with a paid solution like LoJack for Laptops. For smartphones and tablets, look into Prey, Find My iPhone, Find My iPad or Lookout Mobile.

How to backup your contacts

Smartphones will almost always back up your contacts to an email service or to your computer, but you need to make sure you sync on a semi-regular basis. iOS 5 will automatically back up your iPhone contacts to Apple’s cloud later this year when it arrives.