According to those in charge of fighting crime in the United States’ largest cities, smartphone manufacturers like Apple, aren’t doing enough to prevent the theft of their users devices.

That’s the gist of a report from the New York Times, as they took an in-depth look at the growing problem of cellphone theft and how large technologies companies are trying to prevent them.

The numbers presented by the Times do paint a picture of rampant cellphone theft. According to statistics compiled by New York City, 14 percent of all crimes that took place in the city, involved either an Apple iPhone or an iPad. The District of Columbia saw and all-time high 1,829 cellphones taken in robberies last year. Though both high, San Francisco managed to top both New York and the District of Colombia, they saw nearly half of all robberies involve a cellphone. 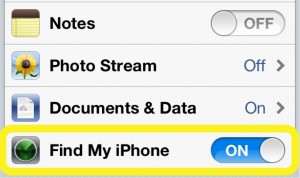 Track a lost or stolen iPhone.

So what’s causing the rise in cellphone theft? According to the officials interviewed for the Times’ piece, it really comes down to a lack of innovation by cellphone manufactures and blind faith by carriers in a national database of stolen phones.

While that national database is maintained by the nation’s largest carriers, it relies on the use of an IMEI or International Mobile Station Equipment Identity number, something that can be easily modified by competent thieves.

While Verizon did indicate that it had plans to create its own database of stolen devices so that it could make it “impossible” for stolen devices to be used on its network, for its part T-Mobile doesn’t seem to have any planes of its own to address the issue.

Jason Young, T-Mobile’s vice president of product management insisted that the carrier “does care very deeply about this” and that “if you’ve ever lost a phone or had one stolen, it’s a scary thing, it’s a painful thing, and it’s a costly thing.”

Those costs are mainly for the user who’s had their device stolen. Though a large amount of cellphone owners in the United States do have the ability to purchase insurance on their device if it’s lost or stolen, many opt to not add that fee on top of their monthly bill. Those with the insurance will need to pay a deductible before receiving a new device. Those without the insurance will need to pay full price for new smartphone which in the case of an Apple iPhone is $649.

The second part of the problem, according to officials has to do with the technology companies offering the device’s themselves. George Gascon, the district attorney for San Francisco, thinks that cellphone manufacturers aren’t doing enough to create technologies that would stop device thefts in the first place.

He says that he met with Apple’s Michael Foulkes to talk about the possibility of improved antitheft technology in Apple’s products, but he left the meeting without a clear indication that Apple would be making any changes. According to Gascon, “Unlike other types of crimes, this is a crime that could be fixed easily with a technological solution.” Gascon would like to create a method of making a stolen devices completely useless, regardless of its location.

Apple declined to comment on the Time’s piece. Though Apple has certainly done more than some other technology companies have to prevent theft. It’s Find My iPhone and iCloud products can immediately locate and allow a user to track a stolen device that is on and has an internet connection. Microsoft’s Windows Phone allows its users to do the same thing. For its part, Google does not include any kind of software to locate a user’s device, though a user can add it through third-party applications if they choose.

In addition to changing a stolen cellphone’s IMEI number, thieves will usually prepare them for resale by clearing the device’s memory. The device is then resold to other users a slight discount that what a brand new device might cost, a stolen iPhone might cost a user $450. A new device from Verizon would cost a user $649 without a carrier subsidy.